Longest-serving poppy seller Rosemary, 103, 'over the moon' at MBE 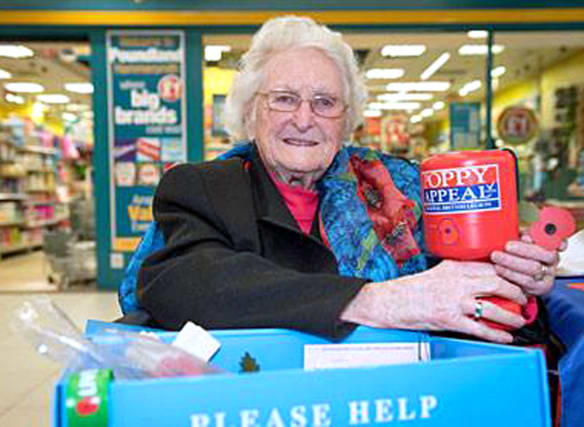 Britain's longest-serving poppy seller is "over the moon" after being awarded an MBE in the Queen's birthday honours list.

Rosemary Powell, 103, plans to retire from selling poppies later this year after a remarkable 97 years of collecting for the appeal.

She first helped her mother sell poppies on Richmond Bridge for the Royal British Legion's first Poppy Appeal in 1921 when aged six.

The great-grandmother, from London, is planning on hanging up her collection tin this year and hand over to a new generation of fundraisers as she is "getting old".

On Friday evening it was announced that the widow - whose first fiance died in the Second World War - will be awarded an MBE.

"It is very nice that I have been given this," she said.

"I still vividly remember selling poppies on Richmond Bridge with my mother."

Her son Giles said: "The MBE is a tremendous reward for years and years of hard work and loyalty.

"Mum is absolutely over the moon. It's great recognition for a lot of hard work."

Son Nick added: "There is no doubt that she was inspired by the terrible loss her mother suffered, as well as her own personal loss of her fiance, Robin Ellis."

Mrs Powell lived close to where poppies were made in Richmond for the first Poppy Appeal and sold them on the bridge with her mother, Evelyn.

They ran out in "no time" and so her mother fashioned new poppies out of red crepe paper bought from a nearby flower shop.

Her father Charles Ashton James served with the 126th Baluchistan Infantry and was left wounded after being shot in the head during the Battle of the Somme.

She lost two godfathers and three uncles during the First World War.

Her first fiance, Robin Ellis, a commander in the Royal Navy, died in 1944 when the Lancaster bomber he was flying in crashed near Inverness.

Mrs Powell's younger brother Peter, a major in the Army, died during the Second World War.

"We did it in memory of those men who were killed, for their sacrifice," Mrs Powell previously said.

She lived in Africa for a year in the 1950s but made poppies out of paper to give to local people during Remembrance.

When she returned to the UK, Mrs Powell sold poppies in London including at the Kings Mall shopping centre in Hammersmith.

Charles Byrne, director general of the Royal British Legion, said: "Rosemary's incredible long-serving support of the Legion has literally helped thousands of Armed Forces personnel, veterans and their families over the generations.

"She is a true inspiration who continues to inspire people across the country.

"We are forever in debt to Rosemary for her efforts which continue to encourage new generations of volunteers to give their time to the Legion - whether it's as fundraisers, case workers or information volunteers.

"From everyone at the Legion, we congratulate Rosemary on her MBE and we wish her a very happy retirement."