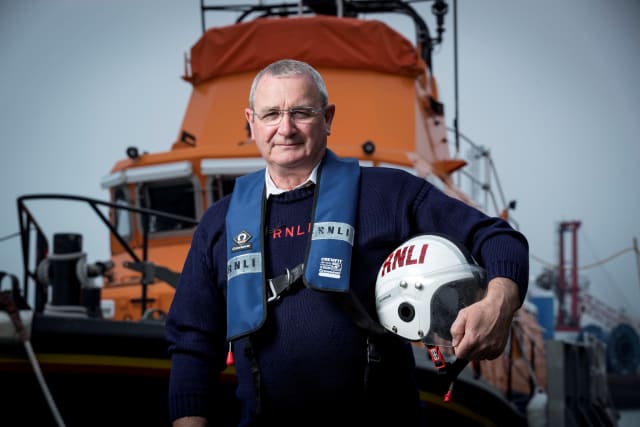 A lifeboat volunteer involved in 634 rescues has been honoured with an MBE along with long-serving emergency service workers.

Bill Deans, 68, started volunteering with Aberdeen's Inshore Lifeboat team in 1976 when he was working as a police officer.

He retired from the force in 2002 and took up a role with the RNLI to train crews.

Mr Deans said the first of his 634 rescues was the most unusual when the lifeboat team towed a helicopter back to shore after it made a precautionary landing in the middle of the North Sea during safety warnings. All 15 people onboard were found safely on life rafts.

He said: "We recovered the helicopter door, which had been jettisoned as part of the ditching procedure, and the engineer re-fitted it to prevent the aircraft from sinking as we towed her in.

"It was a long tow back - about 7 hours as I recall - but all ended well. In fact, I believe the helicopter was back flying about 3 weeks later.

Mr Deans added: "Whilst I'm honoured to receive the MBE, the lifeboat service isn't about individuals, it's about crews.

"I've had the good fortune to serve with outstanding crew mates down the years.

"None of us could have carried on without the bond which exists within crews, and every life we saved was a crew achievement."

From Police Scotland, Inspector Craig Rankine and Superintendent Suzie Mertes have been awarded the Queen's Police Medal for their work with the force's Youth Volunteers programme and Scottish Women's Development Forum respectively.

Rosemary Curtis, Libby Logan and David Rout are to receive the Queen's Fire Service Medal for their service, while paramedic Pat McGrattan has been honoured with the Queen's Ambulance Medal for 20 years of volunteer training with colleagues.