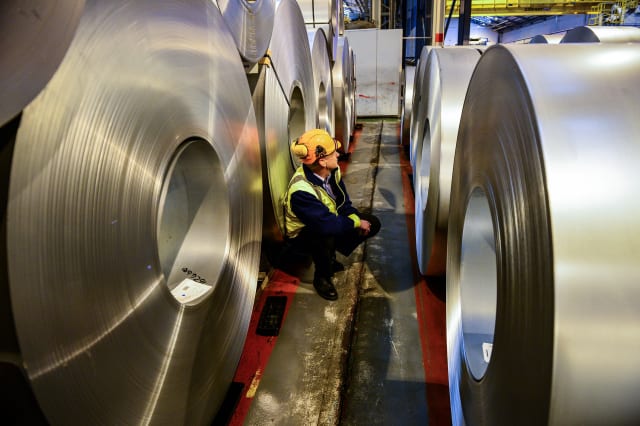 Theresa May has told President Donald Trump that US tariffs on EU steel are "unjustified and deeply disappointing".

The Prime Minister spoke by phone with the US president on Monday afternoon, four days after the announcement of a new 25% levy on steel imports and 10% on aluminium.

The PM's official spokesman characterised the 30-minute call as "constructive" and said they agreed to discuss the issue further at the G7 summit in Canada later this week.

"The Prime Minister raised the US decision to apply tariffs to EU steel and aluminium imports, which she said was 'unjustified and deeply disappointing'," said the spokesman.

"The PM said that the US, UK and EU are close national security allies and we recognise the importance of the values of open and fair trade across the world.

"The Prime Minister also underlined the need to safeguard jobs that will potentially be affected by this decision.

"They agreed to discuss this and wider issues of free and fair global trade further at the G7 summit later this week."

The call came shortly before International Trade Secretary Liam Fox addressed MPs in the House of Commons on the tariffs, which he described at the weekend as "wrong and illegal".

But he exempted Canada, Mexico and the European Union to buy time for negotiations, a reprieve that expired at midnight on Thursday.

The decision not to extend the exemption led to accusations that the president was triggering a trade war which could hit economies around the globe, including that of the US.

Mrs May's spokesman stressed that the UK was seeking an exemption from the tariffs as part of the EU, and not trying to strike its own deal with Washington.

"We are members of the European Union and we have been clear that we and our EU allies are seeking an EU-wide exemption," he said.