What the papers say - June 3 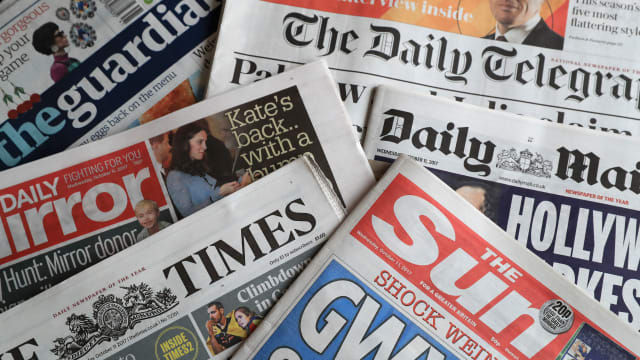 Brexit features prominently on the front pages on Sunday, as Theresa May faces fresh criticism over her approach to negotiations.

The Observer reports on calls from a major Tory party donor for Michael Gove to take over as leader.

Crispin Odey warned that Mrs May had shown she "cannot carry Brexit through" and said the government needed to be far bolder in its attitude to Brussels, the paper adds.

The Sunday Telegraph carries a warning from Priti Patel that the Conservatives are no longer the party of meritocracy.

The paper leads on the former International Development Secretary's comments in an interview with The House magazine, in which she criticised the party's "negativity" on Brexit.

Meanwhile, the Sunday Times claims that Britain would be hit with shortages of medicine, fuel and food within a fortnight if the UK tried to leave the EU without a deal, according to a "Doomsday Brexit" scenario.

The paper says civil servants are drawing up contingency plans for the port of Dover to collapse "on day one" if a no-deal Brexit occurs.

Elsewhere, the Mail on Sunday claims it has found a key witness in the Jeremy Thorpe case who police had assumed was dead, while the Sunday Mirror reports that a British Breaking Bad fan was found murdered in the desert where the TV series was filmed.

The Sunday Express leads on an interview with a man who was stabbed in the London Bridge attack as he reveals he has found his soulmate one year on from the incident.

The Daily Star on Sunday reports that road rage killer Kenneth Noye will apply for home leave, to the disgust of his victim's father.