What the papers say - June 2 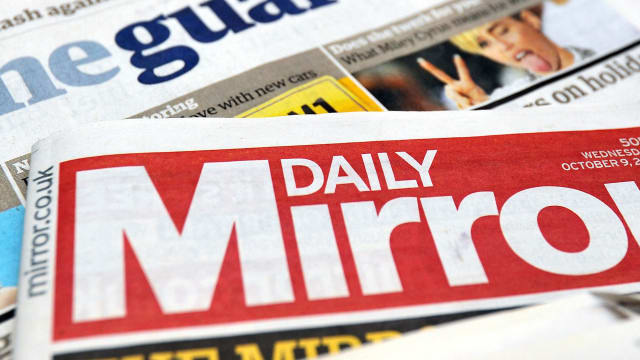 A variety of news makes the front pages on Saturday - from problems with Visa cards to backlash over a campaign by cosmetics chain Lush.

The Guardian reports that millions of people were left unable to pay for goods and services across Britain and Europe on Friday afternoon after an "unprecedented" crash in Visa's payment system.

People were unable to use their debit and credit cards from about 2.30pm, the paper says.

The Daily Express describes the situation as "chaos", and says customers struggled to pay at shops, bars and restaurants, while queues grew at cash points as people tried to withdraw money.

Visa apologised for the system failure.

The Home Secretary and crime chiefs were among those "appalled" by the company's decision to put photos of police under the words "Paid to Lie" in its shop windows to draw attention to the so-called "spy cops" scandal, the paper says.

Benedict Cumberbatch channelled his inner Sherlock Holmes when he leaped to the aid of a cyclist who was being attacked, according to The Sun.

And the Daily Telegraph reports that supermarkets will be banned from selling sweets and chocolate at check-outs under Government plans to tackle child obesity.

Court cases feature on the fronts of both the Daily Mirror and Daily Star, with the Mirror reporting that a man is accused of sending tweets to Christine Lampard about writing her epitaph.

The Star says a Gogglebox star is facing jail after being found guilty of assault.

Elsewhere, the ongoing fallout from the US steel tariffs leads the i, which says the UK motor industry fears it will be the next target of Donald Trump sanctions.

The Financial Times reports that Britain's highest earners paid 9% more in income tax last year than the year before, while The Times claims that Google is cashing in on mobile phone apps that are being used by abusive men to spy illegally on their partners.