Pro-choice campaigners have taken what they said were abortion pills outside courts in Northern Ireland in defiance of the region's strict laws on terminations.

Amid tense scenes at a rally in Belfast, police moved in to seize some pills and a robot used by the activists to distribute them. 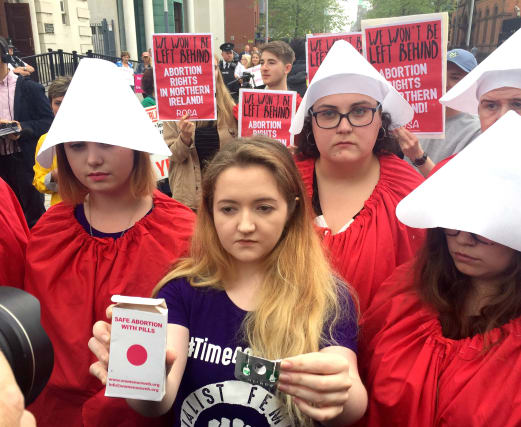 Officers also attempted to remove one woman who openly took a tablet in front of the High Court building.

They led her away from the demonstration and a vocal stand-off ensued, with fellow campaigners quickly surrounding her and demanding she was not arrested.

After several minutes, the officers, on instruction from the inspector in command of the operation, abandoned their attempt to speak to the woman.

Northern Ireland is the only part of the UK where abortion is not legal, aside from exceptional cases.

The rally outside Belfast's High Court and Crown Court came days after the Irish Republic voted in a referendum to overturn its near-blanket ban on abortion.

Eleanor Crossey Malone, from socialist feminist movement Rosa, was one of those who took the pill in front of television cameras.

"I have taken this in defiance of the extremely outdated, medieval, anti-choice laws that exist in Northern Ireland," she said.

"We are not willing in the wake of the repeal referendum to be left behind any longer.

"Northern Ireland after repeal will be one of only two jurisdictions remaining in Europe to criminalise women effectively for having abortions.

"We are not willing to accept it anymore."

Taking an abortion pill is illegal in Northern Ireland if the intent is to cause a miscarriage.

The women who took the pills said they did not wish to disclose whether they were pregnant.

Ms Coppinger said it was an "outrage" that the 1967 Abortion Act that applies elsewhere in the UK had not been extended to Northern Ireland.

"There is no way that Northern Ireland is going to get left behind," she said.

"We are very concerned about what is happening here today and we welcome the presence of the PSNI to ensure that our laws are upheld here in Northern Ireland," she said.

"Our laws matter because every life matters."

After a tense hour-long encounter staged in an open area between the court buildings, the pro-choice activists boarded a bus.

They drove towards the Lisburn constituency office of the anti-abortion Democratic Unionists, who oppose liberalisation in Northern Ireland, to continue their day of protest.

Former DUP health minister Jim Wells watched from the other side of the road as the activists picketed the party offices.

Prime Minister Theresa May has come under pressure to legislate for abortion in Northern Ireland since the Stormont Assembly has been suspended for months.

Mr Wells said Mrs May would "endanger" her confidence and supply deal with the DUP at Westminster if she moved to change abortion laws in the region.

He said the issue was "crucial" to the survival of the deal.

"I believe Theresa May is not going to endanger the supply and confidence arrangement on this issue," he said.

The earlier event at the courts in Belfast saw Ms Crossey Malone and two other activists gather in a circle while others dressed as handmaids, in reference to the Margaret Atwood novel The Handmaid's Tale about women's rights being stripped away, stood behind them.

The three women produced and took the tablets.

Ms Crossey Malone added: "Women every day in Northern Ireland are using these pills - as long as we don't talk about it, as long as we act like it is a secret, politicians are not under pressure to legislate on this.

"We are bringing it into the spotlight in order to demand that politicians take action on this immediately and extend the 1967 Abortion Act to Northern Ireland."

She said the Police Service of Northern Ireland (PSNI) was under enormous pressure and was aware of the international pressure inspired by the pro-choice movement south of the border.

"There is pressure on the state at every level to change the situation here, it has been described as a violation of human rights," she said.

She added that they were "willing to flout the law because we do believe it violates human rights".