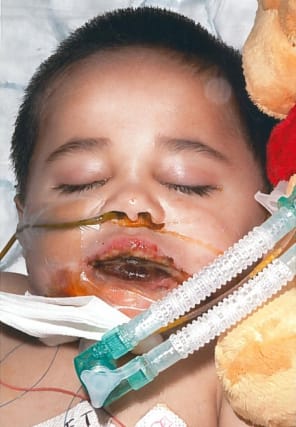 A family have won damages after a toddler drank toxic drain cleaner in a supermarket when his mother's back was turned while out shopping.

Ayman Faisal was strapped in his buggy but as his mother Saira turned to pick something up, he reached out and grabbed the bottle himself off a low shelf.

The youngster, aged two at the time, opened the bottle, and swallowed the cleaner containing caustic soda.

He suffered severe burns to his mouth, airway, oesophagus and stomach and was left fighting for his life in intensive care in a Manchester hospital following the incident in January 2013.

Now aged seven, the youngster has been unable to breathe without the aid of a tracheostomy, cannot speak and needs a feeding tube in his stomach so he can eat and drink.

A final financial settlement will not be reached until the long-term effects of Ayman's condition are known.

In the interim the shop and bottle manufacturers have agreed to fund a trip to Cincinnati Children's Hospital in the US, an international centre of excellence for paediatric medicine, to see if anything more can be done.

Following an investigation, the manufacturer - Active Brands Concept Ltd - admitted the child-resistant cap had been faulty and will pay two thirds damages.

And the shop, SAFA Superstore in Moss Side, Manchester, was ruled partly responsible after a judge found that the bottle should have been stored on a higher shelf. They must pay one third damages.

The shop also did not have the correct licence to sell the toxic substance which was clearly marked "keep out of reach of children."

Ayman's mother, Saira Faisal, 38, from Rusholme, Manchester, also suffered chemical burns to her hands and feet as she desperately tried to help her son.

Recalling the moment she realised something was wrong, she said: "Ayman was strapped into his pushchair and I was reaching to get something. It was only for a few seconds, but when I turned back I saw his lips had gone purple and blue and there was blood coming out of his mouth.

"I remember screaming at the staff to phone an ambulance while I tried to get as much as I could out with my hands. I was terrified. All I kept thinking was 'please don't let me lose my son.'"

He now attends Lancasterian School in Didsbury and is learning to communicate using his iPad and sign language, and his family have won compensation after a five-year legal battle.

Mrs Faisal added: "It has been a struggle and I've had my moments, but when it comes to Ayman I just have to carry on.

"I am so proud of him for what he has been through and I try to stay positive and make sure he does too."

Alicia Rendell, a serious injury specialist at Slater and Gordon solicitors who represented the family, said: "It has been a long road for Saira to get justice for her little boy but now, finally, she has the security of knowing that he will be given the best care possible and the very best chance of getting better.

"These types of products are deadly and those who manufacture and sell them need to take seriously their duty of care."