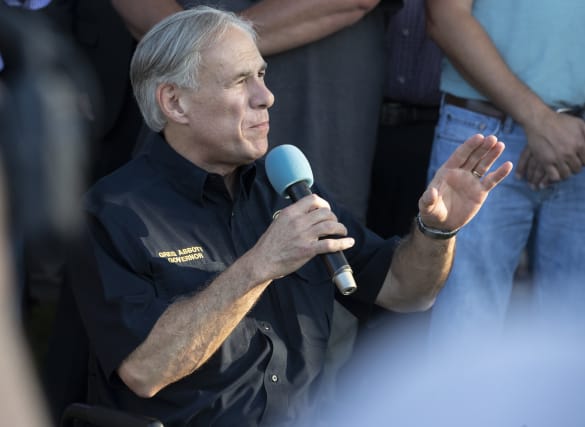 Texas governor Greg Abbott has wrapped up three days of emotional meetings on school safety and mass shootings by speaking with survivors from last week's shooting at a high school near Houston.

The Republican, who is campaigning for re-election, organised the mostly closed-door meetings shortly after eight students and two substitute teachers were fatally shot last week inside Santa Fe High School.

Most of the ideas centered on monitoring student mental health and security measures, such as "hardening" campuses with armed guards and teachers. Abbott hasn't said when or what he'll recommend to address those issues, but said on Thursday that "we are going to do more than just talk, we are going to act".

Mr Abbott so far has ignored calls from a handful of state politicians from both parties to call the Legislature into special session to address gun laws, which is a sharp contrast to the response in Florida after a high school shooting in February killed 17 people.

Three weeks after that massacre, Florida politicians, who were already in session, passed a gun-control package after a lobbying campaign led by student survivors of the attack.

Politicians are not scheduled to meet until January 2019 in Texas, a state that embraces its gun-friendly reputation and has more than 1.2 million people licensed to carry handguns.

Unlike the students in Florida, several students at Santa Fe High School have been vocal opponents of increased gun control, including some of those who were invited to meet Mr Abbott on Thursday.

The only tweaks to gun safety Mr Abbott mentioned as possibilities this week were stronger laws on gun storage and reporting of lost or stolen weapons, and quicker reporting to law enforcement when a court order denies someone access to a gun.

Several of the families who met with him on Thursday said they did not want to talk about new gun restrictions or the politics of gun rights.

Mr Abbott has signed bills in recent years that reduce the cost and training needed for a handgun licence and expanded where handguns can be legally carried.

During a National Rifle Association (NRA) meeting earlier this month, Mr Abbott said the violence problem is not caused by guns but by "hearts without God".

This week's meetings included representatives of both gun rights and gun control groups. However, Alice Tripp, legislative director of the Texas Rifle Association, an affiliate of the NRA, said her group found "no common ground" on gun restrictions and would be cautious of anything that would deny access to buy or own guns.

"No common ground except to say that public safety is very important and no one supports the criminal misuse of anything," Ms Tripp said. "Crimes are not stopped by laws."

Stephen Willeford, the church neighbour and former NRA gun instructor who was hailed as a hero for grabbing a rifle and firing back at the attacker, also attended the meeting.

The issues that seemed to get most of Mr Abbott's attention this week -- better security, tracking student mental health and school counselings -- would cost money, and the state's public schools are already living under strained budgets.

While most of the week's meetings were closed to the public, media was allowed in for about two hours of conversation between the governor and the students and families.

"Arming teachers, and not knowing who is armed, that is what we need," said Grace Johnson, a Santa Fe senior who hid in a band room attic during the attack. "I cannot tell you how much safer I feel in public with my father having a gun on him."

Ms Johnson noted her government class wrote to Mr Abbott's office after Santa Fe High School had a three-hour lockdown in February because of a false shooting alarm.

"We wrote letters to you, my entire government class, on why is this happening and what can we do to fix it. We didn't get anything back. We didn't get acknowledgement," she told Mr Abbott.

"It finally happened to our school and we weren't surprised. ... It's happening everywhere."

An Abbott spokeswoman would not confirm if those letters were received.

"If they are serious about making schools more secure, they need to quit talking about arming teachers and start appropriating the state funds necessary to hire more campus police and install more security safeguards in school buildings," including metal detectors, Clay Robison, spokesman for the Texas State Teachers Association, said this week.