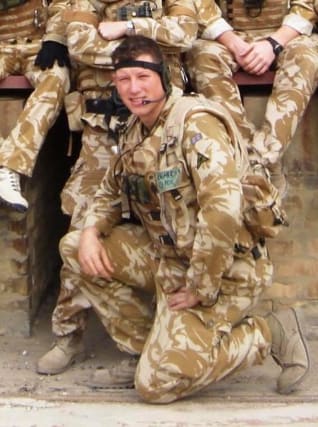 Former England football captain Terry Butcher said his son Christopher was a "victim of war" as an inquest heard the former soldier struggled to cope with post-traumatic stress disorder (PTSD) before his death.

Christopher Butcher, 35, had been a captain in the British Army and served in Afghanistan with the Royal Artillery.

But on his return he turned to drugs as he battled PTSD.

An inquest in Ipswich concluded that Christopher died of an abnormal enlargement of the heart, of uncertain cause, combined with the effect of drugs against a background of PTSD, coroner's officer Stefan Jochan said.

Christopher died at the family home in Bawdsey, Suffolk, on October 16 2017.

His father Terry Butcher told reporters at Monday's hearing that Christopher's life "spiralled downwards as the demons took control of his mind" and he "became a victim of war" after tours of Iraq and Afghanistan.

Dan Sharpstone, Suffolk's assistant coroner, said: "When people serve in the armed forces they give everything in the defence of our country.

"This may result in death, or serious mutilating physical injury.

"However, it may also result in the agony of serious mental illness.

"I suspect Chris was hounded day and night by an enemy he couldn't see in his war without end.

"Unsurprising, perhaps, that when all else fails people with post-traumatic stress disorder may turn to illicit drugs and try and gain at least a temporary respite from their mental torture.

"Such men and women are ultimately casualties of war, deserving of both our sympathy and our utmost gratitude and respect."

Terry Butcher previously said he was "devastated" by the death of his son.

Butcher won 77 caps for England and appeared at three World Cups during his playing career, which included spells as a defender for Ipswich Town, Rangers and Sunderland.

A Ministry of Defence spokesperson said: "This is a tragic case and our thoughts remain with the family and friends of Christopher Butcher.

"We are committed to providing troops and veterans with the care they deserve and this year have increased spending on mental health to over £22 million a year, have set up a new veterans' taskforce, and launched a 24-hour helpline for service personnel and their families to call in times of crisis."