Many of the hundreds who had gathered to watch found it difficult to bear as the two-metre high photographs of those who died in the arena attack were displayed on a huge screen in the centre of Manchester. 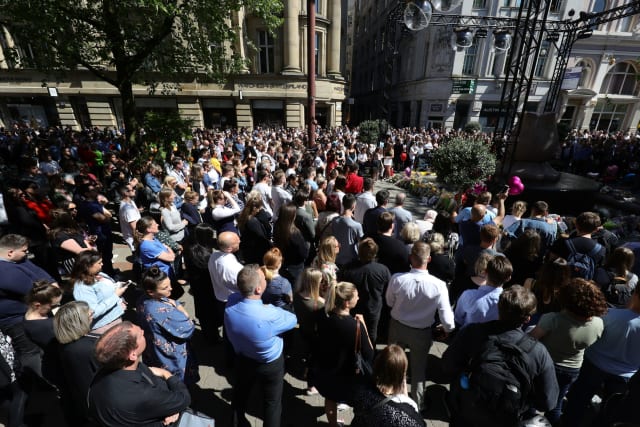 More than a thousand people had waited in the bright sunshine in Cathedral Gardens for the service to begin just 100 metres away.

And, when the screen lit up and music began, most held it together as they watched the service open and sang along with the hymns.

Most struggled to keep themselves from sobbing through the choir's performance of Somewhere Over A Rainbow.

But, when the names and photos of the deceased came up on the screen, many of those near the front of the sea of people held their heads in their hands.

Some held each each other as they cried - small pockets of people clearly identifying with specific names on the giant display.

The emotional scenes outside the cathedral continued as everyone stood for the one minute silence.

Groups of people hugged each other throughout the crowd while others stared quietly at the screen or the floor.

As applause marked the end of the silence, somebody let a single bee balloon loose into the sky.