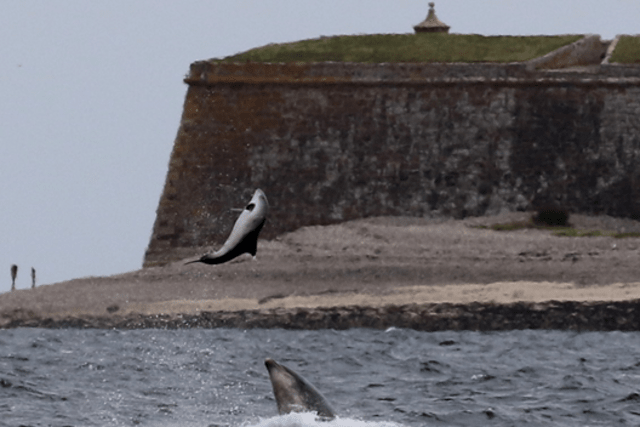 A rare attack by a dolphin on porpoises has been captured on camera in the north of Scotland.

Photographers initially thought the bottlenose dolphin was throwing a large salmon into the air as they feed on the species but a closer look at the pictures revealed the rare sight.

The pictures were taken by Jamie Muny and Alister Kemp at Chanonry Point in the Moray Firth earlier this month.

Sea Watch Foundation, a national charity that monitors the numbers and distributions of whales, dolphins and porpoises around the British Isles, said it had been alerted to a series of unusual sightings of bottlenose dolphin attacks in the Moray Firth and described the pictures as "exceptional".

Mr Kemp said: "In the hundreds if not thousands of hours I've spent photographing the dolphins, I have never witnessed such an attack."

Chiara Giulia Bertulli, sightings officer for Sea Watch Foundation, said: "The cause of these incidents is not clear but aggressive interactions could be due to the high co-occurrence of the two species which can result in competition over a shared food resource, occasionally leading to the death of the smaller species, although other theories have included misdirected infanticide.

"The changing testosterone levels in male dolphins could also influence the extent and seasonality of these attacks. The waters in the UK are incredibly rich for whales, dolphins and porpoises, and reporting sightings, whether they are of species displaying unusual behaviours or not, is a really important for Sea Watch as they are way to learn more about the many cetacean species occurring around the UK."