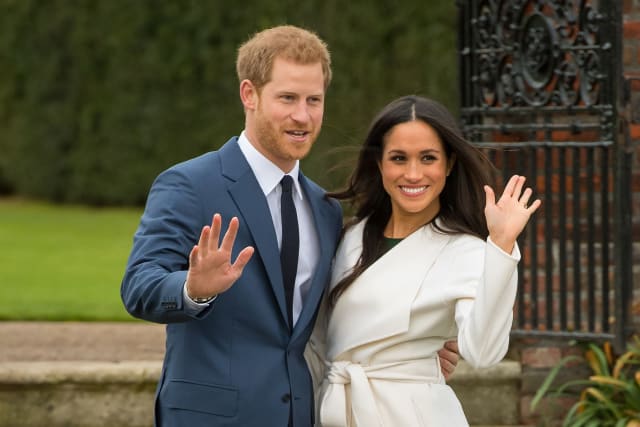 Closely guarded royal wedding details remain secret, with even the gardener kept in the dark about how his flowers will be displayed on the big day.

Nursery manager Mike Jones said he does not know where floral designer Philippa Craddock will use his flowers, so will be trying to spot them as he watches the wedding on TV.

"We don't know where they're going to be, so we'll be eagerly looking out ourselves to see where they are," Mr Jones said.

Asked if he felt under pressure, the 58-year-old from Leamington Spa said: "We do, because we really want it to be the best we can possibly do. It's showcasing not only our growing of plants, but the Royal Parks in general."

It is thought the flowers - between 150 and 200 individual plants which are pollinator-friendly - will be incorporated into Ms Craddock's displays in and around St George's Chapel which will feature white garden roses, peonies and foxgloves.

Branches of beech, birch and hornbeam will also be used in the decorations, with the locally sourced foliage coming from the gardens and parkland of The Crown Estate and Windsor Great Park.

Mr Jones said geraniums "add a splash of colour", adding: "They live for years so they will grow all summer, flower all summer, die down in the winter, and then come back again the following year, so very good value."

The gardener said they were ideal for "a relaxed look".

"It's only a few more days to go, so we want them to be absolutely pristine when they go."

Looking ahead to Saturday, Mr Jones said: "I shall be watching the wedding along with half the rest of the country I would imagine. Looking out for my plants."

Dr Alice Laughton, conservation manager at the Royal Parks, explained the importance of the flowers being pollinator-friendly, and what that might mean.

"The flowers that have been chosen are particularly pollinator-friendly flowers, which means they have a good store of nectar so they provide a lot of food for pollinators that are attracted to the flowers.

"So on wedding day we might see some bees, some bumblebees, hoverflies, some butterflies, all important pollinators here in the UK," she said.

The 36-year-old, from Bourn in Cambridgeshire, added: "We're really excited. We work really hard to try and champion pollinators and support them because they're in decline."

Dr Laughton is also excited for another reason - she is getting married this Saturday too.

"I like to think that all the wedding buzz is about my wedding so it's been quite fun," she said.

Talking about the flowers at her own wedding, she said: "My parents actually have grown all my flowers, so they've grown native pollinator-friendly flowers as well."