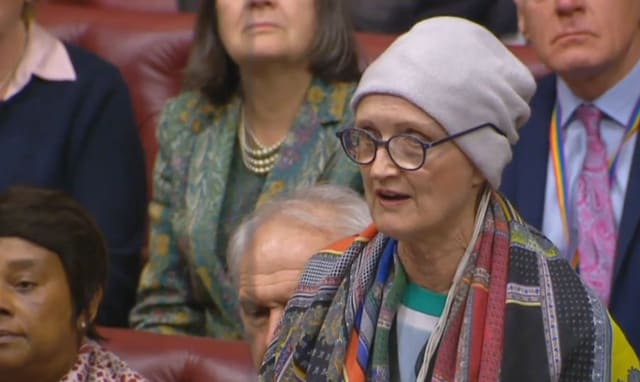 Dame Tessa Jowell was given a standing ovation after making an emotional plea for more cancer treatments to be made available through the NHS months before her death.

The Labour peer, whose death was announced on Sunday, called for more opportunities for "adaptive trials" in which patients can undergo different treatments, and if one does not work they can immediately move on to the next.

Baroness Jowell, whose voice cracked several times during her House of Lords speech in January, told fellow peers of her cancer diagnosis and subsequent battle to beat the disease.

She said: "On May 24 last year, I was on my way to talk about new Sure Start projects in East London.

"I got into a taxi but couldn't speak, I had two powerful seizures. I was taken to hospital.

"Two days later, I was told that I had a brain tumour, glioblastoma multiforme, or GBM.

"A week later the tumour was removed by an outstanding surgeon at the National Hospital in Queen Square."

Baroness Jowell, who was one of the Labour Party's best known faces during Tony Blair's era, went on to say how she had taken solace from Irish poet Seamus Heaney.

She said: "Seamus Heaney's last words were do not be afraid. I am not afraid, but I am fearful that this new and important approach may be put into the 'too difficult' box."

She added: "All we now ask is that doctors and health systems learn to do the same. Learn from each other.

"In the end, what gives a life meaning is not only how it is lived, but how it draws to a close.

"I hope this debate will give hope to other cancer patients like me.

"So that we can live well with cancer, not just be dying of it."

As Baroness Jowell concluded her speech peers, members of the public and Health and Social Care Secretary Jeremy Hunt, who was also in the chamber, rose to applaud.

The tribute was thought to be the first of its kind in the House of Lords.