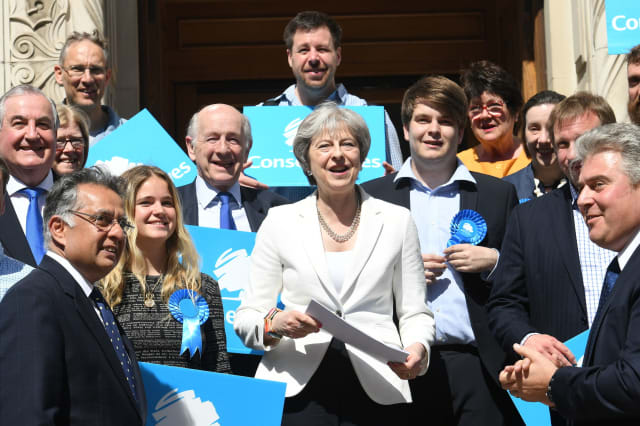 Theresa May has hailed Conservative "success" in English local elections after Tories denied Labour the breakthrough which many in Jeremy Corbyn's party had predicted.

Conservatives held on to "crown jewel" authorities in London including Wandsworth, Westminster and Kensington, as well as the key Labour targets of Barnet and Hillingdon, while picking up votes from Ukip across England.

Ukip suffered a bloodbath, with dozens of councillors culled and its own general secretary comparing the party to the Black Death.

In Barnet, there was clear evidence of voters from the area's large Jewish community turning their backs on Labour after the party became embroiled in allegations of anti-Semitism.

Mr Corbyn sought to put a brave face on overnight results which saw Labour pick up more than 50 seats but gain control of only one council, in Plymouth.

Meeting activists in the Devon city, Labour's leader denied that his party has passed the moment of "peak Corbyn".

"No, no, there is much more to come and it's going to get even better," Mr Corbyn told Sky News.

"Obviously, I am disappointed at any places where we lost a bit of ground, but if you look at the overall picture, Labour gained a lot of seats across the whole country, we gained a lot of votes in places we never had those votes before."

Labour sources described their results as "solid", saying that the party had consolidated advances made at last year's general election.

But the impact of its underwhelming performance was amplified by a failure to damp down expectations of victory in Tory strongholds which have not voted Labour in decades.

Mrs May was greeted by cheering supporters in Wandsworth, where she praised their efforts in beating off a Labour challenge which had seen the streets flooded with activists, including members of the Corbyn-backing Momentum campaign.

"Labour thought they could take control, this was one of their top targets and they threw everything at it, but they failed," said the Prime Minister.

The message from the elections was that "Conservative councils deliver great local services at lower taxes", said Mrs May, adding: "We won't take anything for granted. We will continue to work hard for local people and we will build on this success for the future."

Labour said that tight results in four Wandsworth wards meant it missed out on victory by just 141 votes.

Other dramatic scenes in the capital saw Liberal Democrats gain 25 seats in  Richmond to regain control of the Remain-backing borough for the first time in eight years. Tories lost 27 councillors and were reduced to a rump of just 11.

Visiting the leafy south London suburb, leader Sir Vince Cable said Lib Dems were "very much on the way back", with increased vote shares in areas including Hull, Sunderland and Liverpool.

"We set out with the objective of holding our ground, winning one or two councils and making a bridgehead in many other places. We've exceeded that," he said.

"In very different parts of the country - Remain, Brexit, Labour-facing, Conservative facing - we are very much on the way back."

Mr Corbyn's party lost Nuneaton and Bedworth - a bellwether area that often indicates the colour of the government at general elections - as well as Derby.

And it fell short of gaining control in areas like Swindon, Dudley and Walsall, where it had hoped to establish middle England strongholds.

The Conservatives gained control of councils in Peterborough, Southend and Basildon, and saw a small swing in their favour outside the capital. But they lost Trafford, their flagship council in the North West, to no overall control

In Barnet, former Labour councillor Adam Langleben voiced his anger at the impact which the row over anti-Semitism had on his party's fortunes.

After losing his seat in West Hendon, Mr Langleben tweeted: "We must NEVER have another election like this. No community group should have their vote dictated by their safety. That should shame us."

And he won support from Labour MP and Corbyn critic Wes Streeting, who told him: "I am so so sorry. This defeat wasn't yours."

Conservative chairman Brandon Lewis said voters were being turned off by "hard abuse from some of the hard left, that anti-Semitism problem that Labour clearly have got and are just not dealing with".

Mr Lewis hailed "a good night" for Tories, with Labour not gaining a single council in London.

"Eight years into a government, Labour was losing 4,000 councillors, whereas we at the moment are holding councils and in some areas making positive inroads," he said.

Ukip's general secretary Paul Oakley compared his party to "the Black Death" as he struggled to find positives in a night of virtual wipeout.

"It's not all over at all," Mr Oakley told BBC Radio 4's Today programme.

"Think of the Black Death in the Middle Ages. It comes along and it causes disruption and then it goes dormant, and that's exactly what we are going to do. Our time isn't finished because Brexit is being betrayed."

The one point of light for Ukip was Derby, where the party held one seat and picked up another, unseating Labour's leader in the city. Former deputy chairwoman Suzanne Evans openly discussed the prospect of the party "crumbling".

Across England, more than 4,000 seats were contested in around 150 councils, including all 32 London boroughs, as well as every ward in Birmingham, Manchester, Leeds and Newcastle.

Voters in some areas piloting controversial ID trials were reportedly unable to cast their ballot.