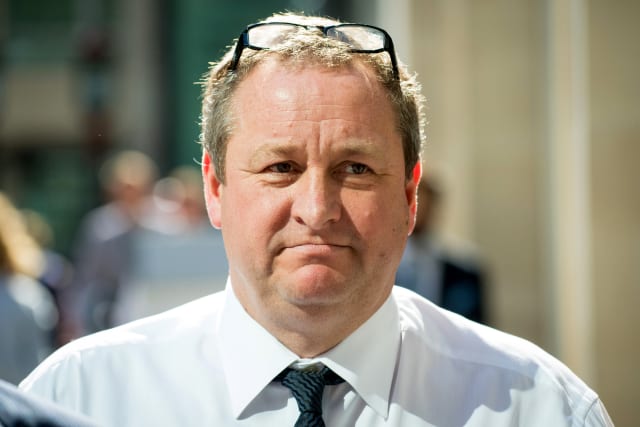 The explosive allegations were made as part of a formal complaint to Parliament about Mr Wright's conduct when he spearheaded an inquiry into Sports Direct's working practices.

In a letter penned by Sports Direct chairman Keith Hellawell, and seen by the Press Association, the company also accused Mr Wright of presiding over a "media circus" while chair of the powerful Business Select Committee.

Mr Hellawell said hate calls to Sports Direct's customer services team jumped by more than 100% after the MP conducted a number of interviews concerning the 2016 probe.

"On one occasion, the calls included a threat to rape a member of staff, and another caller said that they hoped Sports Direct employees would be diagnosed with cancer," Mr Hellawell wrote.

"Our staff were also subject to a number of physical assaults and verbal abuse in our stores.

"This coincided with a catastrophic fall in the share price of Sports Direct, which depleted tens of millions of pounds from the value of our share bonus pool for eligible staff."

Mr Wright's investigation of working conditions in Sports Direct - which saw Mr Ashley hauled in front of MPs - concluded that its Shirebrook warehouse was run like a "Victorian workhouse".

Sports Direct has hit back at the inquiry, saying Mr Wright's behaviour towards the company "risked undermining confidence" in the select committee process.

Mr Ashley, who also owns Newcastle United, is the founder, chief executive and majority shareholder in the sports retailer.

The company also claimed that Facebook founder Mark Zuckerberg's recent refusal to appear before MPs could be linked to the "political vilification" faced by Sports Direct.

"In recent times some select committee proceeding have exposed witnesses appearing before them to a form of inquiry that can only be called a 'public trial'," Mr Hellawell wrote.

"Public exposure of that kind has the potential in a high profile case to adversely affect the companies' and individuals' fundamental rights including commercial rights, privacy and fair process."

Responding to Sports Direct's claims, Mr Wright, who stepped down as an MP before last year's election, said the committee was right to act because the retailer was "treating agency workers like muck".

"They make a number of allegations which I completely and utterly rebut. It was their business model and their treatment of workers that raised those problems," he said.

"I find this whole situation bizarre and baffling, and I think the work that we did really, really stands up as a fantastic example of what a select inquiry can do."