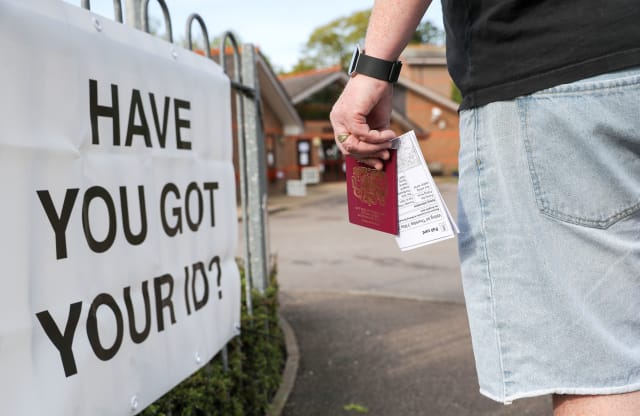 Labour has demanded the scrapping of controversial ID trials in local elections after observers reported that around one in 60 voters were turned away from polling stations.

Pilots of voter ID schemes were carried out in the May 3 polls in Bromley, Gosport, Swindon, Watford and Woking, in an effort to cut down on voter fraud.

Observers from the group Democracy Volunteers who attended polling places in each of the five council areas found that voters were refused a ballot paper in 21% of locations because they were unable to prove their identity.

A total of 1.67% of the 3,229 voters sampled were unable to cast their ballots, said the group, though it stressed it was unable to say whether any of them returned later with ID.

The planned introduction of voter ID has raised concerns that it may make it more difficult for vulnerable groups like the disabled, the homeless and older voters to cast their ballot.

And there was anger on Thursday among some of those turned away.

Peter White, 76, of Bromley, denounced it as a "nonsense scheme", and said he was "shocked" to be denied his vote.

And another Bromley resident, Hazel Walters, said: "It's absurd. I think it will discriminate against people. Not everyone's got a passport, a driving licence and all of that. I think people will be disenfranchised."

Labour's spokeswoman for voter engagement, Cat Smith, described the pilots as a "fiasco".

And she said the introduction of ID checks was "a sledgehammer to crack a nut", after the Electoral Commission watchdog found only 28 cases of "personation" - voter fraud by claiming a false identity - in local and national elections in 2017.

"There was absolutely no case for introducing voter ID in the first place but, after yesterday's fiasco, it is impossible for the Government to justify rolling it out," said Ms Smith.

"After completely ignoring a number of serious warning signs, the Government decided to pilot discriminatory measures which denied people their right to vote.

"We cannot allow the Conservative Party to undermine our democracy, which is why Labour is calling on the Government to scrap their voter ID plans as a matter of urgency."

A Government spokesman insisted the pilots had been a "success".

"Voter ID is an important step to ensuring the public can have greater confidence in our democratic system and the success of yesterday's pilots proves that this is a reasonable and proportionate measure to take," said the spokesman.

"The overwhelming majority of people cast their vote without a problem. We will evaluate the pilots before announcing the next steps in delivering voter ID nationally. As well as this, the independent Electoral Commission will conduct a planned evaluation of the pilots."

Observers from Democracy Volunteers attended a total of 243 polling stations across the five council areas, spending between 30 and 45 minutes at each.

They saw only one possible case of attempted "personation" - voter fraud by claiming a false identity - when a man in Bromley went to the polling station with his passport but was told he had already voted using a Freedom Pass as ID.