Everything stargazers need to know about the Eta Aquariid meteor shower 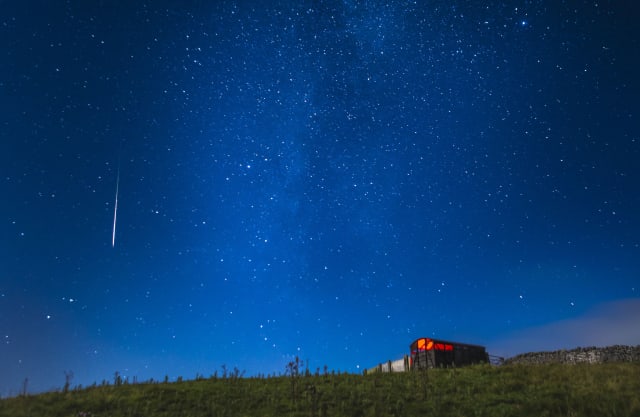 Skygazers can look forward to seeing several shooting stars as Earth passes through the dust left over from Halley's Comet.

The Eta Aquariid meteors appear every year at this time and are expected to peak this weekend.

Here is everything you need to know about this celestial event:

Why is it called the Eta Aquariids?

This is because the meteor shower appears to emerge from the constellation of Aquarius located in the southern hemisphere - which might make some of the shooting stars difficult to see.

As Dhara Patel, an astronomer at Royal Observatory Greenwich, explains: "At this time of the year, much of Aquarius remains below the horizon until the predawn hours.

"For those of us in the northern hemisphere, this meteor shower is not favourably placed."

Why does it occur?

Meteoroids from Halley's Comet, officially designated 1P/Halley, strike the Earth's atmosphere at an approximate speed of 150,000 miles per hour (240,000kph), burning up in the process.

Ms Patel said: "As the dust descends through the Earth's atmosphere it burns up, producing the streaks of light that we refer to as meteors."

When is the best time to see it?

The shower is visible from late April to near the end of May, but Ms Patel reckons the best time to see it will be on May 7 between midnight and dawn, when the sky is darkest and the shower will be at its brightest.

She said: "Typically, after midnight would be a good time to look for meteors but for the Eta Aquariids you'll need to wait until the early hours - around 3am-4am.

"The waning gibbous moon is also close by, meaning there is likely to be interference from moonlight."

How will you be able to see the shower?

Ms Patel advises getting far away from all artificial lights.

She said: "It's best to head away from the city to a rural location where there are few buildings and trees to obscure your view of the south-eastern horizon in particular.

"Remember, the best tool for the job is your eyes as they give you the widest field of view.

"It will be challenging to spot meteors from this shower but some do leave persistent trains so you could still spot a few!"