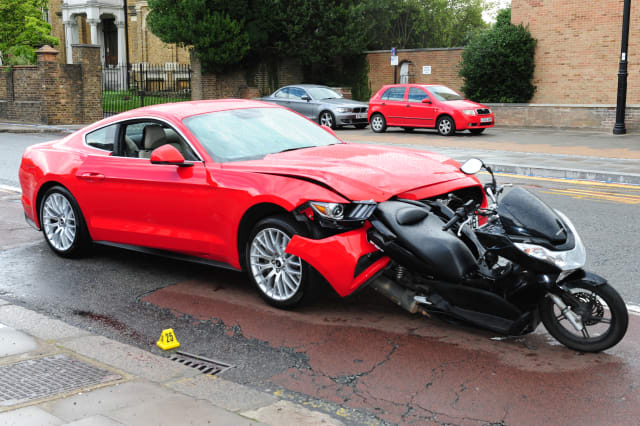 A furious motorist who killed a teenage moped rider after his prized Mustang car was slightly damaged has been jailed for at least 23 years.

Bradley Clifford, 24, drunkenly chased a scooter at nearly double the speed limit on the wrong side of the road after a bottle was thrown at his high-powered sports car.

He ploughed into Jahshua Francis, 19, and his pillion passenger Sobhan Khan, 18, following the relentless pursuit through Enfield, north London, in the early hours of August 5 last year.

Mr Khan was sent flying into the air, landing by a lamp-post in the street, mortally injured.

Clifford got out and continued the attack, shouting at the teenager, saying he "deserved" it and punching him hard nine times, the Old Bailey heard.

It was "pure chance" that the victim's friend, Mr Francis, was not badly hurt in the crash, jurors were told.

Before the killing, Clifford threatened to put a knife down the throats and "rain hell" on anyone who interfered with his beloved Mustang in a WhatsApp message to his girlfriend.

Following his trial, Clifford, from Enfield, was found guilty of murdering Mr Khan and attempting to inflict grievous bodily harm with intent on Mr Francis.

In a statement, Mr Khan's father Najam Khan said the whole family were shaken by the "senseless and barbaric killing".

He described his only son as a "rising star" with a promising future, adding that "no parent should ever have to bury their child".

Sentencing, Judge Sarah Munro QC told Clifford that he clearly regarded his Ford Mustang as a "status symbol which he took pride in".

She said: "The two young teenagers who got onto the moped did not know how enraged you were or what you were capable of.

"Had they seen the WhatsApp message they would not have been misguided enough to throw a bottle at your car."

After attacking Mr Khan in an "intense rage", Clifford had the presence of mind to lie to police about what happened, she said.

But the jury was shown "compelling" CCTV footage and saw through his "false defence", in which he claimed it was an accident.

Judge Munro told Clifford he had worked himself up into a "rage" when he got behind the wheel of his powerful car.

She said: "You decided that those on that moped had to pay the price, and you pursued them intent that they did."

She handed Clifford a life sentence with a minimum term of 23 years for murder and seven years for the attack on Mr Francis, to run concurrently.

The defendant, who worked as an air conditioning firm manager, made no reaction as he was sent down.