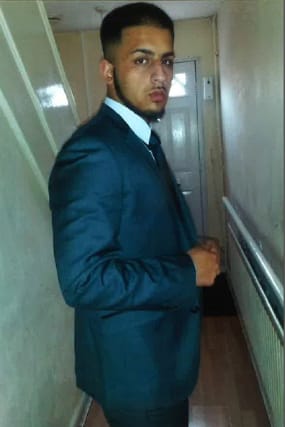 A motorist has been found guilty of mowing down and killing a teenager on a moped after his "prized" red Mustang was damaged.

Bradley Clifford, 24, became enraged when his car was hit with a bottle and gave chase to a scooter being ridden by Sobhan Khan, 18, and his friend Jahshua Francis, 19.

Mr Francis and his passenger drove into oncoming traffic and tried to mount the pavement but were flung into the air following the relentless pursuit through Enfield, north London, in the early hours of August 5 last year.

Lying motionless and catastrophically injured, Mr Khan was then beaten up by Clifford who had got out of his car when it became entangled with the moped.

Prosecutor Aftab Jafferjee QC had said: "The moped was no match for the might of the Mustang.

"It was rapid, it was brutal and it was unrelenting. He pursued the moped down a straight stretch of road at speed. Not to apprehend the two people on it, but to mow them down for daring to damage his prized vehicle.

"As Sobhan Khan lay virtually motionless, totally defenceless and fatally injured, such was this defendant's rage that he went over to him and beat him."

Tempers had earlier flared after a disagreement between two groups of young people outside a bar shortly after 3am, resulting in a proposed fight at a nearby car park, jurors had heard.

Clifford, from Enfield, denied murdering Mr Khan and attempting to inflict grievous bodily harm with intent on Mr Francis claiming it was an accident.

A jury deliberated for nearly 14 hours to find the air conditioning firm manager guilty by a majority of 10 to two.

The defendant stood impassively in the dock as the verdict was delivered.

He faces life in jail when he is sentenced at the Old Bailey on Friday.