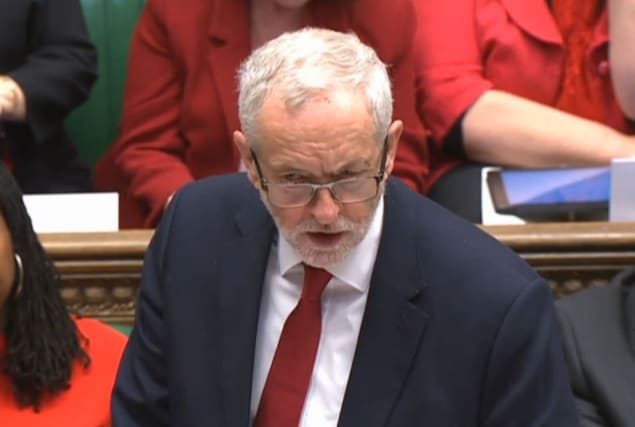 Jeremy Corbyn accused Theresa May of "damaging" schools and the NHS as he used Prime Minister's Questions to focus on community spending ahead of local elections.

The Labour leader opened by seeking to pile further pressure on the Prime Minister over the Windrush scandal before switching to issues affecting councils and other local authorities.

He described the Government's record on the economy as a "failure", said Mrs May appeared to be "in denial" of school funding cuts, and claimed violent crime was rising, with "deaths from knife crime on the streets of most cities, particularly London" amid a backdrop of police job losses.

Mrs May defended her administration's approach, telling MPs there was extra funding for the NHS, schools and social care before claiming "Conservative councils cost you less" by highlighting varying council tax rates for residents of a south London street which is covered by two authorities.

Voters will head to the polls on Thursday as elections take place at 150 councils in England along with six mayoral contests.

PMQs also saw the first backbench appearance of Amber Rudd since she resigned as home secretary following criticism of her answers about immigration targets and handling of the Windrush scandal.

Speaking at PMQs, Mr Corbyn claimed there were 100,000 vacancies for NHS staff before adding: "The Prime Minister personally intervened to overrule the Health Secretary and the Home Secretary when they asked for a relaxation of visa rules in order to recruit staff to work in our NHS.

"But it's not just the NHS where the Government is damaging public services. In January, the Education Secretary (Damian Hinds) promised that no school would see a cut in its funding.

"Last week he was invited to repeat that pledge and refused. I wonder why?

"Will the Prime Minister now tell parents, teachers and students the truth that the schools budget has in fact been cut in real terms all over the country?"

Mrs May replied: "(Mr Corbyn) is wrong. What we are doing is ensuring that there is more money available to schools, we are ensuring we are protecting that core budget because we want to ensure every child - regardless of their background - gets the education they need and fulfils their potential."

She added 1.9 million more children were in good or outstanding schools under the current Government, with education standards going up.

In his final remarks, Mr Corbyn said: "The economy is slowing, homelessness is rising, more children are living in poverty, the Home Office is in chaos, and the Government is making a complete shambles of Brexit negotiations.

"They're damaging our NHS, damaging our children's schools, cutting police as crime soars and they claim to be strong and stable.

"With council tax rising by more than 5% all over the country, isn't the truth facing voters tomorrow that with the Tories you pay more and you get less?"

But Mrs May replied by saying there was more funding going into the NHS, schools and social care, before adding: "If he wants to talk about the impact of council tax on local residents, I suggest he goes to Hazelbourne Road in Clapham.

"On one side of the road in a typical home, someone will pay nearly £1,400 in council tax. That of course is in Labour-run Lambeth.

"On the other side of the road someone in a typical home will pay just over £700 in council tax. That's in Conservative-run Wandsworth.

"No clearer example can there be that Conservative councils cost you less."