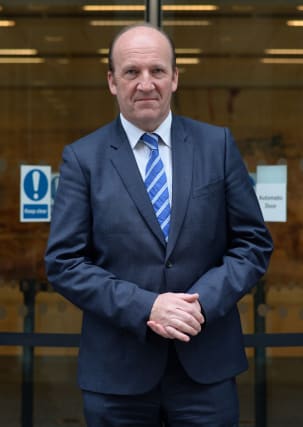 A journalist embroiled in a tax dispute has told a tribunal how he took redundancy from the BBC then returned eight months later to work under a freelance arrangement.

Broadcaster David Eades told two judges how he was paid via a "private service company" he set up when he returned.

He said BBC bosses told him that setting up the company was the "route to take".

Mr Eades, Joanna Gosling and Tim Willcox are challenging income tax and national insurance demands made by Her Majesty's Revenue and Customs (HMRC) officials at a specialist tribunal hearing in London.

The three journalists say they set up personal service companies through which they provided services as presenters or reporters to BBC news programmes.

The broadcasters say that is "not so".

Mr Eades how told how he had been a BBC staff correspondent.

He said he had taken redundancy then started to work again eight months later after setting up a company of which he was the only director and only shareholder.

"It was something I was told by the BBC was the route to take," he told the hearing.

"I was following a route that was explained to me as the route I would need to take."

He said other journalists had been given similar advice.

Lawyers say two tribunal judges are due to analyse evidence and legal argument over two weeks.

They say hundreds of thousands of pounds are at stake.