How Trump's steel tariffs could impact the UK 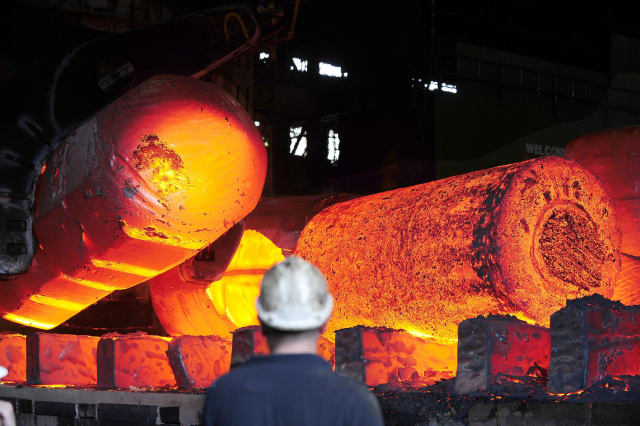 The White House has postponed a decision on imposing tariffs on the importing of steel and aluminium from the European Union, Canada and Mexico for 30 days.

Here, we look at what it all means.

Trade wars, what are they good for?

The president's plan for a 25% tariff on steel imports and 10% on aluminium means that US steel producers would likely see increased domestic demand as imports become more expensive.

The announcement in March played well to workers in the US steel and aluminium industries, which are largely concentrated in the Midwest "rust belt".

US manufacturers would also have enhanced pricing powers as the cost of foreign imports would become prohibitive for those buying steel.

However, US steel consumers would have less choice and could be forced to pay more for steel products.

What would tariffs mean for the UK?

The US initially said no countries would be exempted from the tariffs, raising acute fears for British exporters.

Britain's steel industry exports £360 million worth of products into the US every year, almost 15% of the sector's total exports.

Gareth Stace, the director of trade body UK Steel, said: "In short, these measures would cause serious damage to the prospects of many steel producers here."

What has happened since March?

After the announcement, the World Trade Organisation was among the first to react saying a trade war was not in anyone's interests, and Brussels threatened to retaliate if Mr Trump followed through with the tariffs.

The British Government said it would "robustly" defend the UK steel industry and it was announced on March 22 the White House would "pause" the tariff plan for the European Union while negotiations continued.

Tariffs on imports from six other countries - Canada, Mexico, Australia, Argentina, Brazil, South Korea - were also suspended until May 1.

As the self-imposed deadline approached, the White House announced it was postponing a decision on the tariffs for exports from the EU, Canada and Mexico for 30 days, and that it had reached agreement with South Korea on steel imports and had reached agreements in principle with Argentina, Australia and Brazil on steel and aluminium.

What can the British Government do about it?

Theresa May's Government is holding out hope for a trade deal with the US that will make up for the inevitable loss of trade that comes with leaving the EU's single market and customs union.

With the UK quitting the most powerful trading bloc in the world - the EU - it cannot risk alienating those it seeks new trading relationships with, so options are limited.

But Mrs May has told Donald Trump of her "deep concern" at his plan.

What is the EU doing about it?

Jean-Claude Juncker, the European Commission president, has said that in retaliation the EU would raise tariffs on US goods such as Kentucky bourbon, Levi's jeans and Harley-Davidsons.

Raising the stakes further still, Mr Trump said the US would then put an import tax on cars made in the EU.

The president said on Twitter: "If the EU wants to further increase their already massive tariffs and barriers on US companies doing business there, we will simply apply a Tax on their Cars which freely pour into the US. They make it impossible for our cars (and more) to sell there. Big trade imbalance!"