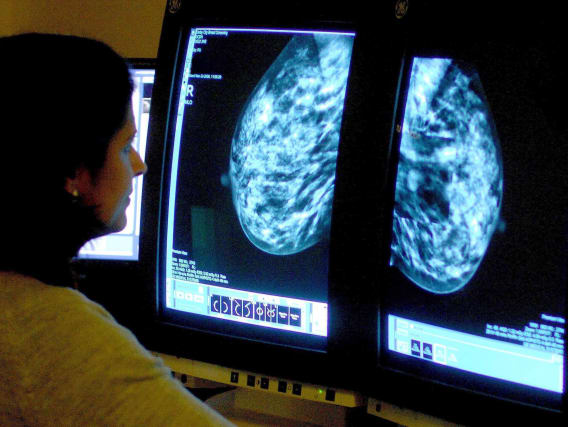 Chemotherapy for one of the deadliest forms of breast cancer can be personalised and improved with genetic testing, new research suggests.

Women with aggressive "triple-negative" disease fare much better on a non-standard chemotherapy drug if they have inherited BRCA gene mutations, the results show.

Currently most patients with this type of breast cancer, which does not respond to hormone therapies or the targeted drug Herceptin, are treated with the chemotherapy agent docetaxel.

But the new trial findings show that those with defective versions of the genes BRCA 1 or BRCA 2 are much more likely to benefit from a different chemo drug, carboplatin.

The results are likely to change international guidelines by introducing genetic testing for women with triple-negative breast cancer.

Lead researcher Andrew Tutt, Professor of Breast Oncology at The Institute of Cancer Research, London, said: "Our study has found that women with triple-negative breast cancer who have BRCA 1 or 2 mutations are twice as likely to respond to carboplatin as they are to standard treatment.

"It strongly suggests that many women with triple-negative breast cancer should be considered for testing for faults in the BRCA genes so those who test positive can benefit from carboplatin.

"Using this simple test enables us to guide treatment for women within this type of breast cancer. I am keen for these findings to be brought into the clinic as soon as possible."

A total of 376 women with advanced triple-negative breast cancer took part in the trial, including 43 who had BRCA gene faults.

Among the BRCA mutation carriers, carboplatin shrank tumours in 68% of cases, while docetaxel only had a 33% success rate.

The drug is thought to be more effective in these cases because it works by damaging tumour DNA in a specific way.

BRCA mutations may impair the ability of cancer cells to repair the genetic damage caused by carboplatin, the scientists believe.

The study, funded by the charities Cancer Research UK (CRUK) and Breast Cancer Now, is published in the journal Nature Medicine.

"Rather than offering all women the same standard of care, these results show that, for patients with inherited BRCA mutations, the drug carboplatin is not only a more effective treatment option, but also comes with fewer side-effects, sparing patients possible health problems, physical discomfort and emotional distress."

She added: "While a cornerstone treatment, chemotherapy can be a blunt tool for many, with side-effects that can be difficult to cope with. It is fantastic news that carboplatin will now offer a more effective, kinder and targeted treatment to a group of patients who have long been in need of new hope."

Triple-negative breast cancer affects around 15% of breast cancer sufferers. Around 7,500 women are diagnosed with the disease each year.