Rudd hangs on as Labour intensifies calls for her to quit 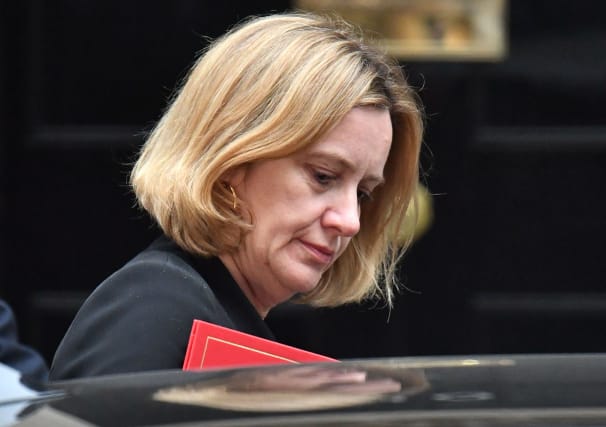 Labour has stepped up calls for Amber Rudd to resign after her former deputy confirmed she did set an "ambition" for the Home Office to increase the number of illegal immigrants it was deporting.

The Home Secretary faces the Commons on Monday with opposition MPs accusing her of having misled Parliament after she told a Commons committee last week that the Government did not have targets for removals.

Her position appeared to weaken after the former immigration minister Brandon Lewis disclosed he had weekly discussions with her about how they could get the numbers up when he was in the Home Office.

However, appearing on BBC One's The Andrew Marr Show, Mr Lewis, the current Conservative Party chairman, insisted they had not talked about specific targets.

He was accused by shadow home secretary Diane Abbott of "hiding behind semantics", saying his disclosure made it clear she knew what was going on in the department.

"Beneath the spin, he let the truth slip and sealed her fate. Amber Rudd knew of the targets she pretended didn't exist. It's time for Rudd to go," she said.

But while Ms Rudd is likely to face a tough time in the Commons chamber, there appears to be little appetite among Conservatives to see her fall, despite continuing controversy over the Home Office's handling of the Windrush scandal.

Downing Street has said she continues to enjoy the "full confidence" of Theresa May while she has received public support from both senior ministers and Tory backbenchers.

Ms Rudd's difficulties began on Wednesday when she told the Commons Home Affairs Committee that the Home Office did not have targets for removals.

The following day, however, she returned to the Commons to admit that Immigration Enforcement managers did use "local targets" but she said they were "not published targets against which performance was assessed".

The pressure then ratcheted up on Friday with the leak of a Home Office memo, which referred to a target of 2,800 enforced returns for 2017-18, and the progress that had been made towards a "10% increased performance on enforced returns, which we promised the Home Secretary earlier this year".

In a series of late night tweets, Ms Rudd said  she had not seen the memo - even though it was copied to her office - but admitted that she should have been aware of the targets.

He position now is likely to hinge on her ability to convince MPs that she did not "knowingly" mislead them earlier in the week.

Mr Lewis said that while he had worked with her "on a weekly basis" about their efforts to increase the numbers of illegal immigrants being removed, they had never discussed "particular numbers" in the way that was suggested at the Home Affairs Committee.

"Yes, I did talk to the Home Secretary about that and the overall work that we were doing and the overall ambition to see an increase in numbers, but not on the detailed numbers and targets," he said.

"What the Home Secretary was very aware of was her ambition to see an increase in the number of people who were being here illegally that we were removing, particularly those foreign national offenders.

"Those internal targets were not in the memo and not figures that she was aware of."

Labour has said the targets contributed to the Government's "hostile environment" for illegal immigrants which led to members of the Windrush generation who were entitled to be in the UK being wrongly threatened with deportation.

More than 200 MPs have written to Mrs May urging her to enshrine in law the promises made to those affected - including a commitment to resolve their immigration status as quickly as possible.

The letter, co-ordinated by Labour backbencher David Lammy, was signed by MPs from Labour, the Liberal Democrats, the SNP, Plaid Cymru and the Greens as well as lone Tory, Anne-Marie Morris.

A Home Office spokesman said the commitments could all be carried through under existing immigration laws.

"Detailed policy guidance and amendments to existing secondary legislation, where necessary, will be brought forward as soon as possible - and in some areas, we will want to consult with the communities affected first to ensure it best meets their needs," the spokesman said.