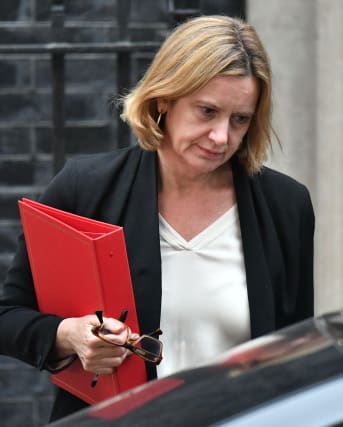 Amber Rudd has resigned has Home Secretary after admitting she "inadvertently" misled MPs over government targets for removing illegal migrants.

Ms Rudd, who has been under pressure since telling a Commons committee on Wednesday there were no such targets, informed Theresa May of her decision in a phone call to Number 10.

In her letter of resignation to the Prime Minister, she admitted she should have been aware of information provided to her office making clear such targets did exist, adding: "I take full responsibility for the fact that I was not".

She also referred to the Windrush "scandal", admitting that people with a right to live in the UK had not always been treated "fairly and and humanely".

Opposition parties said she was paying the price for Mrs May's "hostile environment" policy towards illegal immigrants when she was Home Secretary which had led to people being wrongly stripped of their rights and threatened with deportation.

Shadow home secretary Diane Abbott said: "After this scandal and its botched cover up, Amber Rudd's resignation was inevitable. It should have come sooner.

"The architect of this crisis, Theresa May, must now step forward to give an immediate, full and honest account of how this inexcusable situation happened on her watch."

Labour MP David Lammy, who led the campaign on Windrush, said her resignation was the "a direct result of the hostile environment policy".

He said: "That policy must now be reviewed, and the Home Office must move quickly to compensate and grant citizenship to the Windrush generation."

Liberal Democrat home affairs spokesman Sir Ed Davey said: "It's clear that Amber Rudd has ended up, at least partly, being the fall guy to protect the Prime Minister."

In her reply to Ms Rudd, Theresa May said she was "very sorry" that she had decided to stand down but said she understood her reasons for doing so.

Ms Rudd said that prior to her resignation she had been hoping to devise a policy which would have resolved the Windrush crisis.

It would have included emergency legislation to protect the rights of the Windrush generation - who came to the UK from the Commonwealth in the post-war decades - alongside measures to remove those who were in the country illegally.

"The Windrush scandal has rightly shone a light on an important issue for our country," she wrote in her resignation letter.

"As so often, the instincts of the British people are right. They want people who have a right to live here to be treated fairly and humanely, which has sometimes not been the case.

"But they also want the Government to remove those who don't have the right to be here."

Ms Rudd's decision to stand down will come as a major blow to Mrs May who publicly declared her "full confidence" in her as recently as Friday.

It will also upset the delicate balance within the Cabinet between Leavers and Remainers ahead of a crucial meeting of the Brexit "war cabinet" on Wednesday to discuss Britain's future customs relationship with the EU.

Environment Secretary Michael Gove - one of the Cabinet's leading Brexiteers - was being touted as the front runner replace her at the Home Office.

Ms Rudd had appeared to be prepared to ride out the storm announcing her intention to come to the Commons on Monday to answer MPs' "legitimate questions" about the removals targets.

She has previously apologised in the House for the "appalling" treatment of the Windrush veterans announcing a taskforce to resolve their immigration status as quickly as possible.

However she was criticised for saying the Home Office was "too concerned with policy and strategy and sometimes loses sight of the individual", prompting accusations that she was trying to put the blame on civil servants.

Her latest difficulties began on Wednesday when she told the Commons Home Affairs Committee that the Home Office did not have targets for removals.

The following day, however, she returned to the House to admit that Immigration Enforcement managers did use "local targets" but she said they were "not published targets against which performance was assessed".

The pressure then ratcheted up on Friday with the leak of a Home Office memo, which referred to a target of 2,800 enforced returns for 2017-18, and the progress towards a 10% increase in enforced returns "which we promised the Home Secretary earlier this year".

In a series of late night tweets, Ms Rudd said she had not seen the memo - even though it was copied to her office - but admitted that she should have been aware of the targets.

Her position was further weakened over the weekend however when former immigration minister Brandon Lewis - now the Conservative Party chairman - disclosed they had held weekly meetings to discuss her plans to increase the numbers of removals, although he insisted they did not discuss detailed targets or numbers.