Rudd apologises after admitting she should have known of immigration targets 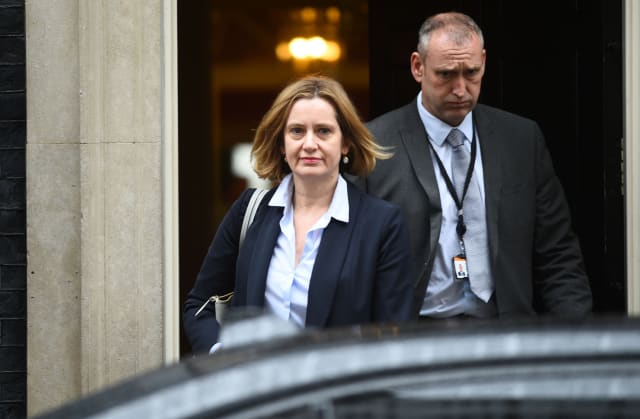 Amber Rudd is fighting for her political life after apologising and admitting she should have known the Home Office had set targets for removing illegal immigrants.

The Home Secretary said she had not seen a leaked internal memorandum referring to the targets - even though she had been copied in.

However she acknowledged that the disclosure had raised "legitimate questions" and said she would be making a statement to MPs on Monday.

Her statement, in a series of tweets, followed accusations that she had misled Parliament after she told the Commons on Thursday that she had never agreed to specific targets for removals.

Downing Street said she had the "full confidence" of Prime Minister Theresa May but Labour and the SNP said her position had become "untenable" and called on her to resign.

Ms Rudd said: "I will be making a statement in the House of Commons on Monday in response to legitimate questions that have arisen on targets and illegal migration

"I wasn't aware of specific removal targets. I accept I should have been and I'm sorry that I wasn't. I didn't see the leaked document, although it was copied to my office as many documents are."

The leak of the memorandum to The Guardian adds to the pressure on Ms Rudd, who has been under fire for her handling of the Windrush scandal which has seen Commonwealth citizens threatened with deportation, even though they were entitled to be in the UK.

For Labour, shadow home secretary Diane Abbott said it was too late for apologies and called on her to resign.

"Amber Rudd is hanging by a thread to shield the Prime Minister from her responsibilities as the initial architect of this cruel and callous approach to migration, which resulted in the Windrush scandal," she said.

"She failed to read crucial documents which meant she wasn't aware of the removal targets that have led to people's lives being ruined.

"Another apology is not enough, she should take responsibility for chaos in the Home Office and resign."

A Downing Street spokesman said: "The Home Secretary has set out her position clearly. The PM has full confidence in the Home Secretary, and the hugely important work she is carrying out at the Home Office."

According to The Guardian, the secret internal Home Office document referred to the department setting "a target of achieving 12,800 enforced returns in 2017-18" adding "we have exceeded our target of assisted returns".

The six-page memorandum, prepared by Hugh Ind, the director general of the Immigration Enforcement (IE) agency, last June, was said to have been copied to Ms Rudd as well as to Brandon Lewis, the then immigration minister, and a number of senior officials and special advisers.

It went on to refer to the progress that had been made towards achieving a 10% increase in performance on enforced returns "which we promised the Home Secretary earlier this year".

Ms Rudd had initially denied the Home Office had targets for removals when she was questioned on Wednesday by a Commons committee investigating the Windrush fiasco.

However, after it emerged a 2015 inspection report made clear the practice did exist, she told MPs on Thursday that while the immigration arm of the Home Office had used "local targets" they were "not published targets against which performance was assessed".

The memo states: "IE has set a target of achieving 12,800 enforced returns in 2017-18, aided by the redistribution of resources towards this area.

"Typically these will be our most vulnerable returnees. We have exceeded our target of assisted returns. We set an internal target of 1,250 of these returns for 2016-17... we delivered 1,581."

"If this secret memo is accurate then it suggests the Home Secretary is either utterly incompetent, or she knowingly lied to Parliament - either way Amber Rudd must go," she said.