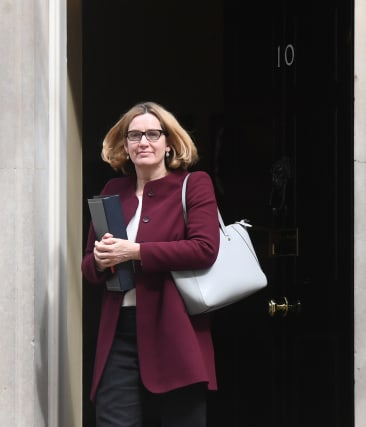 Amber Rudd has faced repeated calls to resign amid claims that her department is "out of control" for using removal targets for illegal immigrants.

The Home Secretary said she never agreed to use removal targets for migrants, adding that those used by her department "were not published targets against which performance was assessed".

She also said Home Office staff should not follow the approach of going after "low-hanging fruit", amid concerns that people were detained if they were viewed as easy targets.

Shadow home secretary Diane Abbott led the latest resignation calls, telling the Commons: "When Lord Carrington resigned over the Falklands, he said it was a matter of honour.

"Isn't it time that the Home Secretary considered her honour and resigned?"

The SNP's Alison Thewliss repeated calls for Ms Rudd to leave her post given the "litany of callous incompetence" in the department, as she accused the Tory Cabinet minister of continuing "unabated" the hostile environment policy.

Ms Thewliss said: "This Home Secretary is presiding over a department out of control, marked by cruelty and chaos.

"Will she stop shielding the Prime Minister? Will she do the honourable thing and resign?

Tory former minister Sir Nicholas Soames said Ms Rudd has the "total support" of her party in "trying to resolve a very difficult legacy issue", while backbench colleague Philip Davies, MP for Shipley, claimed opposition parties are "out of touch" with working-class communities over immigration.

When pressed by Labour's Paula Sherriff (Dewsbury) if she should resign, Ms Rudd replied: "I do take seriously my responsibility but I do think I am the person who can put it right."

Answering an urgent question in the Commons, the Home Secretary earlier told MPs: "I have never agreed that there should be specific removal targets and I would never support a policy that puts targets ahead of people.

"The immigration arm of the Home Office has been using local targets for internal performance management.

"These were not published targets against which performance was assessed, but if they were used inappropriately then I am clear that this will have to change.

"I have asked officials to provide me with a full picture of performance measurement tools which are used at all levels, and will update the House and the Home Affairs Select Committee as soon as possible."

Ms Rudd denied on Wednesday that targets were used as she was quizzed by a Commons committee probing the Windrush scandal.

But her comments appeared at odds with a 2015 inspection report which said the practice did exist.

An inspection of removals by the borders and immigration watchdog said targets were set in 2014/15 and 2015/16, which were split between 19 Immigration Compliance and Enforcement (Ice) teams across the UK.

The targets, and how they were divided up, were first reported by the BBC.

Yvette Cooper, who chairs the Home Affairs Committee, said there appeared to be a "lack of grip" at the Home Office over whether targets were in use.

The Labour MP said she had received evidence of regional targets being used "for some years" and as recently as April, although some had been dropped due to being unattainable.

Following Ms Rudd's appearance before MPs on Wednesday, the Home Office said it had "never been (its) policy to take decisions arbitrarily to meet a target".

Labour leader Jeremy Corbyn has called on Ms Rudd to resign over the Windrush scandal, claiming she had inherited a "failing policy" and made it worse.

An outcry over treatment of migrants from the Caribbean who arrived after the Second World War has put immigration policy and its administration in the spotlight.

A December 2015 report by the Independent Chief Inspector of Borders and Immigration said targets were set for voluntary departures, which took place when an individual or family notified authorities of their intention to leave the UK.

Voluntary departures included people who had approached the Home Office for financial assistance with travel arrangements.

The assistance was available to anyone over 18 who was in the UK illegally, had been refused leave to remain in the UK or had applied for an extension of leave but wanted to withdraw the application and depart.

The Home Office also had a process for returning families who had no legal right to remain in the UK, which had a "single numerical target".

The report said the target was "not a useful performance measure" due to the varying nature of cases year to year.