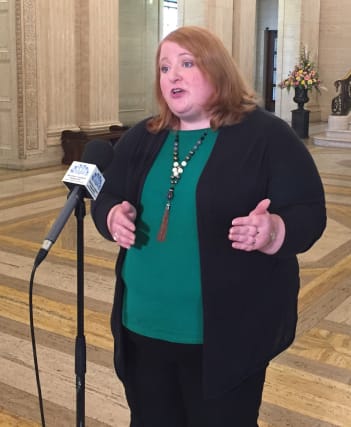 Northern Ireland's devolved institutions could stay stalled for as long as five years, an MLA has warned.

Alliance Party leader Naomi Long expressed frustration at the ongoing political stalemate which has seen the region without a functioning government for almost 16 months.

She called for the British and Irish governments to "bang heads together" and resolve the potentially "disastrous" situation.

Ms Long said: "To me that is just unconscionable at this point.

"We can't allow it to extend that long into the future. We can't genuinely expect people to tolerate five years of nothing."

She was speaking at Stormont where the leaders of Northern Ireland's five main parties met the Secretary of State Karen Bradley.

She added: "At the end of the day someone has to take a decision at some point to start to bang heads together and apply pressure.

"That is not sustainable because every day the to-do list of things grows longer."

SDLP leader Colum Eastwood also urged the two governments to "clear the decks of disagreement" to give Northern Ireland a voice during Brexit negotiations.

He said: "We need now a commitment to bring together the intergovernmental conference, clearing the decks of disagreement and getting on with forming a government."

However he objected to the establishment of a so-called shadow Assembly.

"A shadow Assembly is just another way of people justifying their wages. What we need is a real Assembly," Mr Eastwood said.

Although Ulster Unionist Party leader Robin Swan is "optimistic" about the restoration of the political institutions, he cautioned that the clock is ticking.

He said: "I think time is running out for devolution in Northern Ireland and I think there have to be some credible steps taken soon."