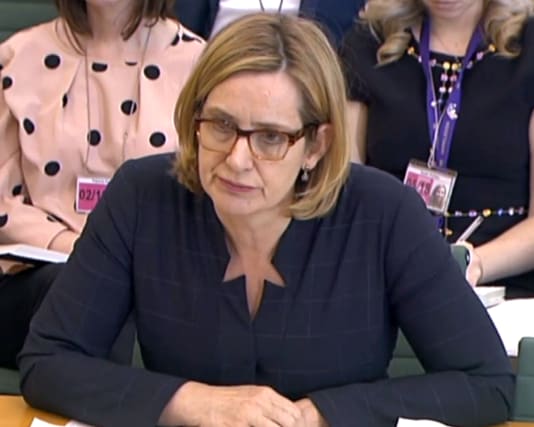 Amber Rudd has spoken of her "bitter regret" at failing to grasp the scale of the Windrush scandal sooner.

The Home Secretary, who has faced calls to resign over the crisis, told MPs she had become aware of there was a "potential issue" over the "past few months".

But she said: "I bitterly, deeply regret that I didn't see it as more than individual cases that had gone wrong that needed addressing.

"I didn't see it as a systemic issue until very recently."

Ms Rudd and her predecessor Theresa May have come under intense pressure after it emerged long-term residents who arrived in the decades after the Second World War were having their immigration status challenged despite being in the country legally.

As a result of the disclosures the Home Office launched a major review to check whether anyone had been incorrectly deported.

Ms Rudd told the Commons Home Affairs committee that so far 7,000 out of around 8,000 records dating back to 2002 had been checked with no wrongful removals discovered so far.

A dedicated helpline set up last week has received more than 1,300 calls about potential Windrush cases, with 91 appointments booked and 23 cases resolved so far.

The revelations have prompted fresh criticism of the Government's "hostile environment" policy to tackle illegal immigration.

Emphasising that those affected by the Windrush affair were in the country legally, Ms Rudd, who said she preferred the phrase "compliant environment", insisted there is "nothing wrong" in trying to remove people who were here unlawfully.

She acknowledged that she had asked for more removals of individuals with no right to be in the UK to take place, but was not familiar with suggestions that regional targets were in place.

Ms Rudd also rejected suggestions that the Tories' target to bring net migration below 100,000 had fuelled the Windrush saga.

"I don't think that's got anything to do with it," the she said.

"It's wrong to think the net migration target is the problem here. The problem here is that people were not properly documented."

Earlier Jeremy Corbyn accused Ms Rudd of taking a "cruel and misdirected" policy which she had inherited and making it worse.

During exchanges at Prime Minister's questions, Mrs May insisted the Government was committed to ensuring those who were entitled to be in the UK were able to remain, but said it was right to clamp down on illegal immigration.

"Up and down this country people want to ensure that the Government is taking action against those people who are here in this country illegally," she said.

Controversy erupted after it emerged that Commonwealth citizens who arrived in the UK from the late 1940s to the early 1970s were wrongly having their immigration status challenged.

Ministers faced a furious backlash over the treatment of the Windrush generation - named after the first ship that brought them to Britain in 1948.

People who had arrived before 1973 were automatically granted indefinite leave to remain but the Home Office did not keep a record of those allowed to stay or any documentation confirming their status.

While many of those who arrived have taken British citizenship or have official documents proving their status, others have struggled to source paperwork demonstrating they are lawfully resident.

Those who have been living legally in the UK for decades have lost their jobs, been denied access to NHS treatment, benefits and pensions, had their driving licences withdrawn and been warned they face deportation.

On Monday Ms Rudd unveiled an emergency package of measures in an attempt to draw a line under the affair, but the Home Office has remained under pressure as new cases continue to emerge.

Under the Government's plans, thousands of people will be offered the chance to obtain British citizenship free of charge and without the requirement to take language tests.

A compensation scheme for those affected by the failings will be introduced within weeks.

In another step, the Government published guidance for employers and landlords to clarify that people in the Windrush generation are legally able to rent property and work in the UK.