Britain ready to work with allies on new Iran deal 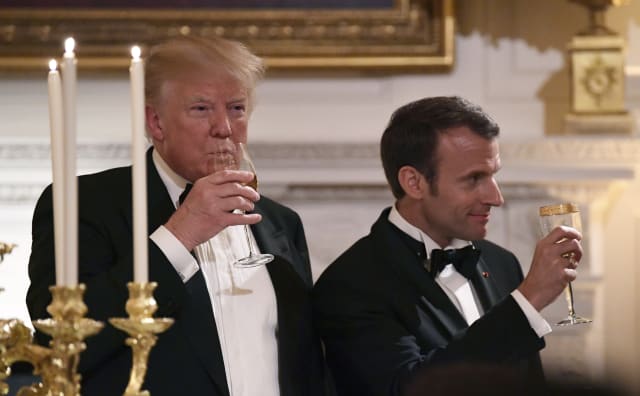 Emmanuel Macron's proposal for a new deal with Iran received a warm welcome from the UK, which said it was ready to work with allies to deal with issues like Tehran's ballistic missile programme and its regional ambitions.

During his state visit to Washington, the French president acknowledged a "disagreement" with Donald Trump over the 2015 deal to rein in Iran's nuclear weapons programme, which his US host has repeatedly threatened to tear up.

Mr Macron said he believed he and Trump could overcome their differences with a new broader deal which would also restrict Iran's regional influence and ballistic missile programme.

The new deal would also create a framework for controlling Tehran's nuclear activities after the current Joint Comprehensive Plan of Action (JCPOA) expires in 2025.

"I always said we should not tear apart the JCPOA and have nothing else," Mr Macron told a joint press conference. "I think this would not be a good solution.

"No matter the decision now that President Trump will take, I would like us to work as from now on a new deal with four pillars, including what is already covered by the JCPOA."

Mr Trump, who had earlier denounced the Obama-era JCPOA deal as "insane" and "ridiculous", told the French president he was ready to be "flexible" on the issue.

"You know, in life you have to be flexible, and as leaders of countries, you have to show flexibility," said the US leader.

Prime Minister Theresa May's official spokesman made clear that the UK was ready to work with allies on the issues identified by Mr Macron.

"We have worked very closely with our French and German partners in relation to this (JCPOA) deal," said the spokesman.

"Our priority is preventing Iran from getting a nuclear weapon. The nuclear deal was the product of 13 years of diplomacy and is working, Iran having reduced its stock of enriched uranium by 95%.

"At the same time, we recognise that there things that the deal does not cover, but which we need to address, including ballistic missiles, what happens when the deal expires and Iran's destabilising regional activity.

"We are working closely with our allies on how to address the range of challenges Iran poses in the Middle East, including those issues which President Macron proposed a new deal might cover."