Millicent Fawcett statue to be unveiled in Parliament Square 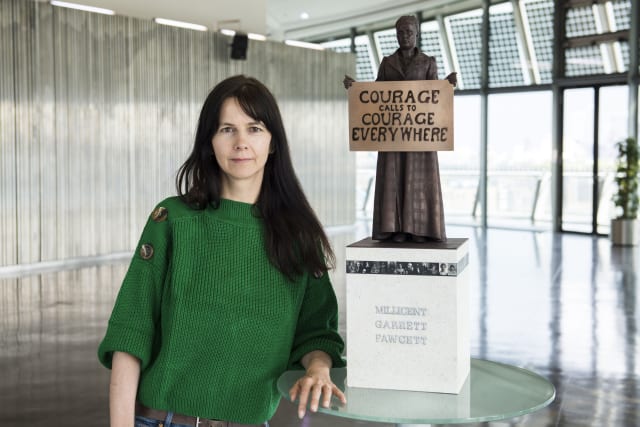 The first statue of a woman in Parliament Square is to be unveiled, two years after the campaign to get female representation outside the Palace of Westminster first began.

Millicent Fawcett, the suffragist who fought for women's right to vote in the early 20th century, will join eleven all-male statues including Sir Winston Churchill, Nelson Mandela and Mahatma Gandhi.

The unveiling on Tuesday comes seven months after the statue, which features a 50-year-old Fawcett holding a banner reading "Courage calls for courage everywhere", first went into production.

Speaking before the unveiling at a private viewing, Mayor of London Sadiq Khan said: "When you think of the great people in Parliament Square and when you realise that not one of them is a woman, it sort of begs the question, are we saying there haven't been incredible women in the past? That our country hasn't been built on the back of great women?"

The whole process - from petition to project manager - has been made up of solely women.

"Londoners are going to love it. They will be blown away."

The campaign was first brought to Mr Khan's attention back in 2016 on the day he became Mayor.

Caroline Criado Perez first launched the online petition after noticing there were no statues of women in Parliament Square during a run.

After attracting thousands of signatures, Westminster Council and the Mayor of London's office confirmed in September 2017 that the statue would be built to mark the 2018 centenary of women's suffrage in Britain.

"Imagine how it must feel if you are a woman or a girl walking around the most progressive city in the world and seeing that the great people are all men and not seeing examples of great women," Mr Khan said.

"It must have an impact, either consciously or subconsciously, on your aspirations, on how you feel your gender is seen by others.

"Look, statues must have a purpose otherwise we wouldn't have so many in our city."

Justine Simons OBE, the deputy mayor for culture and creative industries, said: "It has been a fascinating process, because we have been following it the whole way through. We saw a bit of bronze, we saw some material, a brooch, then some 3D printing, then 10 pairs of boots that were in consideration for the actual boots."

The statue of Fawcett will be erected next to Gandhi and Mandela, a location Mr Khan believes is significant because of their shared "non-violent and peaceful" means of protesting.

The mayor also said that if he had to chose a modern-day hero to commemorate with a statue, he would choose Doreen Lawrence, the mother of Stephen Lawrence who was murdered in 1993.

"I know it's not the done thing to have statues of people who are still alive, but she's the example of a modern-day Londoner who has changed the course of history.

"When she should have been grieving, she was trying to get justice trying to find out what happened to her son. She led a campaign to try and get an inquest and succeeded and then got a public inquiry. Then the law changed, for the better, and now she sits in the House of Lords.

"She shows that we should be impatient for change."

"The struggle to achieve votes for women was long and arduous and Dame Millicent was there from the beginning. For decade after decade, in the face of often fierce opposition, she travelled the country and the world, campaigning not just for the vote but on a whole range of issues.

"I want to thank Gillian Wearing for creating a beautiful and fitting tribute to Dame Millicent and to everyone involved in making this happen.

"For generations to come, this statue will serve not just as a reminder of Dame Millicent's extraordinary life and legacy, but as inspiration to all of us who wish to follow in her footsteps."