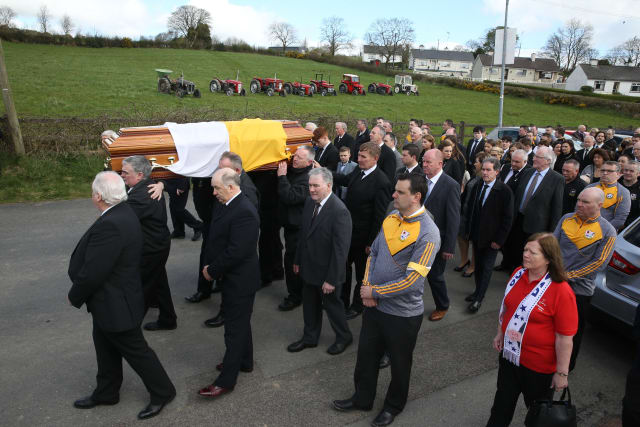 Stars of the Irish country music scene were among mourners at the funeral of Big Tom McBride, with Daniel O'Donnell declaring: "The king will live on."

Hundreds of people descended on the rural townland of Oram, County Monaghan, to pay their last respects to the star who died on Tuesday aged 81.

Big Tom and The Mainliners were formed in the 1960s and achieved widespread success, with Big Tom's hits including Gentle Mother, Four Country Roads and Old Log Cabin For Sale.

When he arrived, Daniel O'Donnell told the Irish press pack: "You think people like Tom are going to go on forever.

"And in the country music circle, there's no question, that he was the king, and he will be the king.

"He may be gone, but the king will live on, in everybody's hearts and certainly in his music."

He added: "It's a huge loss here for the people. The main factor is that he was one of the people, no matter where he went.

"He didn't carry the title of king or stardom very well.

"He was a real down-to-earth man. And he just had a connection with people that you can't explain, other than you've seen it and understood it and were present to experience it.

Daniel told the Press Association: "We'll remember him for his music. Everybody has a song, and numerous Big Tom songs are special.

"But we'll remember him for the man as well - the humble man who I suppose went to the top of his world but yet was as grounded as anybody could ever be."

The president was represented at the funeral by his aide de camp, while Taoiseach Leo Varadkar was also represented.

An Oram GAA flag, Big Tom's Golden Disc, a tractor, a guitar, a fishing rod, and family photos were brought forward by family members to celebrate the star and his great loves.

Father Leo Creelman said it was a sad day for "the world of country music and for many, many people throughout our country and beyond".

He said it was "a heartbreaking replay of events" for the family, as they buried their mother - Big Tom's wife Rose - earlier this year.

"When Rose died a massive part of Tom went with her. He was lost, dazed and brokenhearted," Father Creelman said.

The priest told the congregation: "Big Tom had an amazing presence when he walked into a room or on to a stage.

"He was a man big in stature, matched up with an even bigger heart. Despite all his success and fame, he always remained humble and down to earth and first and foremost a family man.

"I could dwell on his professional career, on his undoubted success and popularity in the Irish country music scene.

"He was referred to as a legend, a giant, an icon, a king, labels often liberally thrown out about others, but titles that Big Tom richly deserved and earned after decades of success in the country music scene, culminating with a lifetime achievement award at the Irish Country Music Awards in 2016."

Father Creelman said Friday was a day to focus on "Tom the family man, the ordinary man, a man very much down to earth", adding: "And it was the earth of this place Oram, County Monaghan, that kept Tom McBride grounded. He loved this place.

"He loved his home, he loved his family, he loved the land. Locals here would often see Tom travelling round the little roads on his quad.

"Not only would they see him but hear him too, as that noisy exhaust never seemed to get fixed.

"But that was where Tom seemed to be the happiest, out and about, whether counting rabbits in the field or cutting ivy away from choking a tree.

"He loved the land, out on the old tractor ploughing or spraying the spuds, other times he was in the garden with the vegetables and flowers.

"Sometimes the outside came in, along with the associated smells, as he would lovingly incubate chick eggs in the good front room of the house, something that drove Rose mad."

The priest said Big Tom had a "healthy interest" in vintage tractors and all things old, and tractors were parked up in a line in the field opposite the church.

He told the packed church that Big Tom enjoyed golf, John Wayne films and water skiing, and played gaelic football for Oram, captaining the junior team to a winning double in 1963.

McBride's career spanned more than five decades and he is survived by sons Thomas and Dermot, daughters Aisling and Siobhan, and sister Madge.