Dale Winton remembered: 'Funny and kind' with 'a heart of gold' 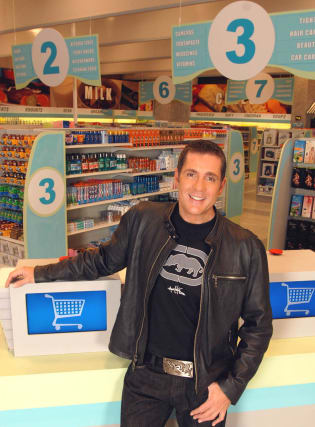 Winton, who became a household name with shows like Supermarket Sweep, Touch The Truck and the National Lottery game show In It To Win It, died aged 62.

David Walliams said that he was "heartbroken" over the loss of his friend.

"Dale was the best company, always outrageous and hilarious. He adored being in showbusiness and loved meeting fans," Walliams wrote on Twitter.

"He devoted his life to making everyone else happy, his friends, the public and his godsons, even though he found it hard to be happy himself."

And he reminisced: "One afternoon Dale and I were out shopping and some policemen were standing on the street corner. He gave them a huge wave and called out, 'Hello loves, hello darlings!'

"I asked why he was saying hello. He replied, 'Always wave at policemen David. You never know when you might need one!'"

TV host Davina McCall said on Twitter: "I am so, so, so sad to hear about Dale Winton a lovely, warm, kind, sensitive, generous soul with a touch of naughty! RIP."

Graham Norton wrote: "Dale Winton gave me the best bit of showbiz advice I ever got - Don't quit the hit! Thank you Dale."

Actor Laurence Fox penned an emotional tribute, writing: "Dear Dale Winton. The kindest, most uncensored man. Drove a Bentley and ate fast food. Had the gentlest touch. Rest in peace. Thank you for being so kind."

Les Dennis said: "So sad and shocked to hear that Dale Winton has died. He was a lovely, warm man who posed charm. RIP."

"Absolutely gutted, only saw him last week. He was one of life's true gentleman, a heart of gold with a wicked sense of humour. RIP lovely man," she wrote.

"What a kind beautiful soul you are. Will never forget your words and support."

Kate Phillips, controller of entertainment commissioning at the BBC, said: "Dale was an immensely well-loved individual who brought a wonderfully unique and special energy to the many programmes he presented over the years.

"He was extremely kind, brilliantly funny and was a true gentleman.

"It is incredibly sad news that he is no longer with us. All our thoughts are with his friends and family at this time."

TV presenter Thornton wrote: "Sleep tight Dale Winton. Always such a gent, such a laugh and such a pro. Taken way too soon"

Nick Knowles added: "Lovely man. Kind and mischievous, generous and a great story teller. Same production crew for In it and Who Dares. We'll all miss him."

Nell McAndrew, who married Winton in a BBC3 spoof, posted a picture of the couple on their happy day.

She wrote: "Dale Winton was always warm and kind. Special memories of a lovely man, often bumped in to each other in the supermarket or on the high street as neighbours before sharing an extra special day together for our 'wedding'

"Thoughts with his family and friends. Lovely, handsome kind man."

"Sad news," he said on Twitter. "Back in the day Supermarket Sweep was the programme to watch.

"Dale Winton was the perfect host, he made it all look effortless. RIP."

Ben Fogle wrote: "So sad to hear the passing of Dale Winton. One of his very first shows was a live Sunday night BBC show with my father called Pet Watch. I spent many a happy Sunday with Dad, Dale and an assortment of animals."

The star's agent announced the TV favourite had died at his home on Wednesday.