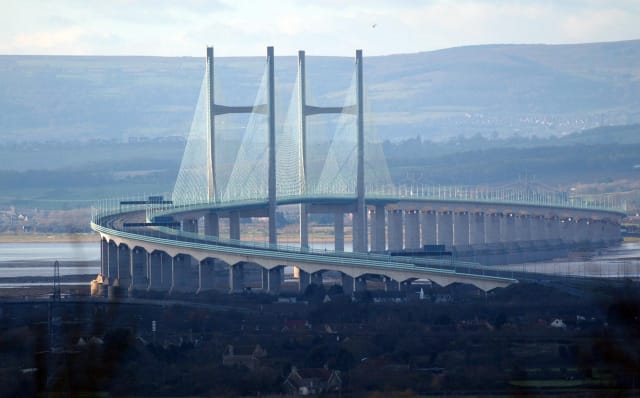 More than 30,000 people have signed a petition against the Second Severn Crossing being renamed after the Prince of Wales.

Alun Cairns, Secretary of State for Wales, announced last week that the bridge would be given the name the Prince of Wales Bridge at a ceremony later this year.

The new title, which has the agreement of the Queen and Prime Minister Theresa May, will mark Charles' 70th birthday year and 60 years since he became the Prince of Wales.

A petition on Change.org, entitled 'Stop the renaming of the second Severn Crossing to the Prince of Wales Bridge', has attracted more than 30,000 signatures.

Jamie Matthews, who started the petition, wrote: "Let's name the bridge after someone who has achieved something for our nation. Let's consult the people before renaming it unilaterally."

Protesters held placards reading: "No to the Prince of Wales Bridge! Let the people decide," during a demonstration in Cardiff over the weekend.

A spokeswoman for the Welsh Government confirmed that First Minister and Welsh Labour leader Carwyn Jones did not raise any objections about the renaming when Mr Cairns wrote to him about it last year.

"It's rare in Wales for tens of thousands of people to sign a petition on an issue like this, with such an emotional and defiant reaction.

"And while Plaid Cymru has been most vocal in terms of elected figures speaking out, we've seen figures in the Welsh media, and politicians from other parties taking the same stance.

"Of course it's not just about the name of the bridge, but the symbolism, and the way the decision was made."

The Assembly Member for Carmarthen East and Dinefwr said the Welsh Government should now make formal representations to the UK Government in favour of a public consultation.

Jo Stevens, Labour MP for Cardiff Central, tweeted: "No tidal lagoon, no post-Brexit replacement funding, no rail electrification to Swansea but Tory Secretary of State has managed to get a bridge renamed. Pathetic."

In a video posted on Twitter, Neil McEvoy, AM for South Wales Central, said: "What we really need is a public consultation about what we want to call this bridge... I think the name of the bridge should really represent the Wales that we want to live in."

The bridge, which crosses the River Severn near Bristol, was inaugurated by Charles in 1996 and he is due to attend the renaming ceremony, 22 years on.

Charles was nine years old when the Queen made him the Prince of Wales at the closing ceremony of the British Empire and Commonwealth Games in Cardiff in 1958.

Now known as the Commonwealth Games, he officially opened this year's competition on behalf of the Queen on the Gold Coast, Australia, on Wednesday.

The renaming ceremony will take place months before tolls on the Severn crossings linking England with Wales are due to be abolished for all vehicles at the end of 2018.

The toll has been in place since the first Severn Bridge was opened in 1966, when the charge stood at two shillings and sixpence - the equivalent of 12.5p in decimal currency.

Announcing the name change, Mr Cairns described it as a "fitting tribute" to Charles' "decades of continued, dedicated service to our nation".

Transport Secretary Chris Grayling added: "This is a great way to usher in a new era for this iconic crossing."