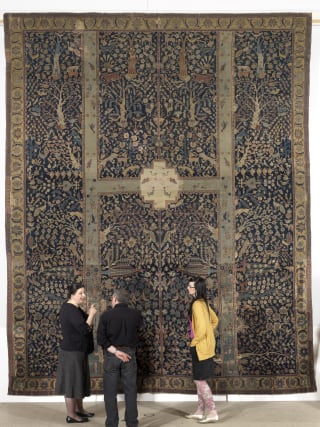 One of the world's "most spectacular carpets" is being loaned to a New York gallery for exhibition by a Glasgow museum while it is closed for refurbishment.

The Burrell Collection's Wagner Garden Carpet will go on display in the Metropolitan Museum's Islamic Galleries from July 10 to October 7, 2018.

It is among works from the Burrell which are being shown elsewhere in the world while the Glasgow museum is closed for a £66 million refurbishment of its building and redisplay of its collection.

The Wagner Garden Carpet is considered to be one of the three earliest surviving Persian garden carpets in the world and will be going on display outside of Great Britain for the first time since it was acquired by Sir William Burrell in 1939.

Measuring 530.9 cm in height and 431.8 cm in width, it has rarely been seen on display due to its size and previous restrictions on lending beyond the shores of the UK, and has spent most of its time in storage at the Burrell Collection.

Most recently the Wagner Garden Carpet was included in the BBC and PBS series Civilisations, currently being aired on BBC2.

"The loan will raise international awareness of the significance of Sir William Burrell's collection while the museum undergoes much-needed refurbishment."

Sir William Burrell bought the Wagner Carpet in 1939 from the Royal Bank of Scotland in Edinburgh and displayed it in his drawing room at Hutton Castle near the town of Berwick-upon-Tweed, Northumberland, later gifting it to the city of Glasgow as part of the collection.

While on display in New York the artwork will accompanied by a supporting display relating to the importance of gardens in Islamic culture and a full public programme including a symposium and a guest lecture by Noorah al Gailani, curator of Islamic Civilisations at Glasgow Museums and the Burrell Collection.

The museum in Glasgow closed in October 2016 and will reopen in late 2020.

Eva Bolander, Lord Provost of Glasgow, said: "The Burrell Collection's partnership with the Metropolitan Museum, New York demonstrates how the Burrell is operating on a global scale through strategic partnerships, loans and research.

"To share works from the Burrell Collection with audiences within the UK and internationally, not only strengthens the international reputation of the Burrell, but also of the city to which Sir William gifted this outstanding Collection."

Some of the most iconic late 19th century French paintings from the Burrell will also tour six international museums in France and Japan for the first time during the refurbishment.

Fifty-eight works from the Burrell will form the inaugural exhibition at the reopened Musée Cantini in Marseilles from May 18 to September 23, 2018.

A further exhibition of 80 masterworks of French painting from the Burrell, along with seven supporting works from Kelvingrove Museum and Art Gallery will then tour Japan from October 2018 to January 2020.