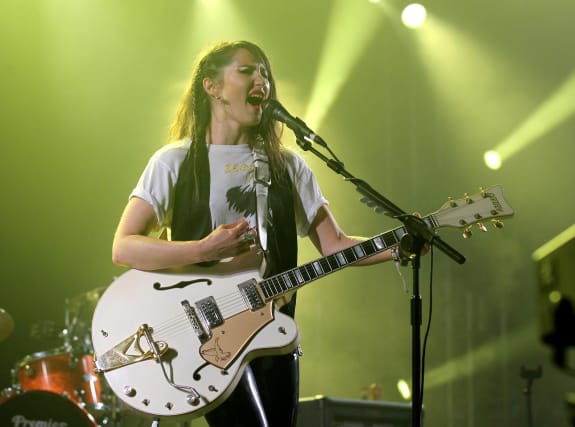 Scots singer KT Tunstall led a procession of thousands as the 20th New York Tartan Day Parade was held in the Big Apple.

More than 30,000 spectators flocked to New York city to celebrate the event and its anniversary.

Around 3,500 participants marched from 44th Street to 55th Street up Sixth Avenue, led by the singer who was named the first female Grand Marshall of the parade.

The procession was made up of pipers, drummers, highland dancers and full pipe bands.

They included Sgoil Lionacleit Pipe Band, who raised more than £60,000 to travel from Scotland to pay tribute to Manchester bombing victim, Eilidh MacLeod from Barra.

In a poignant display the band, from Uist, flew over 30 musicians aged between 12 and 17 over 3,000 miles to march in honour of their friend and band member.

The "parade pups" made an appearance once again, with Tartan Terriers, Hebridean Hunting Hounds and Highland Herders winning over crowds.

The New York Tartan Day Parade is the highlight of a week of celebrations.

Known as New York Tartan Week it involves events, performances and ceilidhs across the city.

"We enjoyed a week of celebrations, with ceilidhs popping up in bars and bagpipes filling the air throughout the city.

"We had an incredible Grand Marshall in KT Tunstall and saw tens of thousands of people line the sidewalks to cheer the New York Tartan Day Parade on."