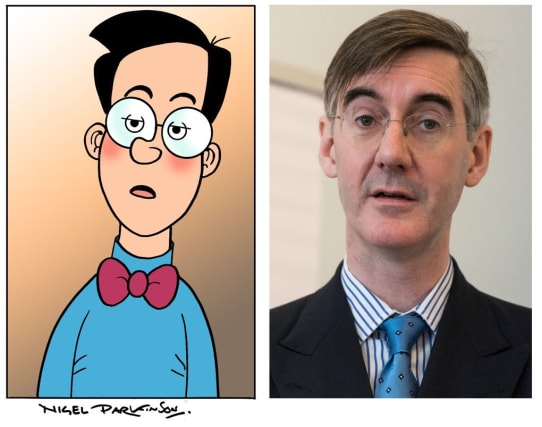 Jacob Rees-Mogg has said he is "flattered" to be compared to Beano character Walter the Softy, after the comic called on him to stop imitating the arch-enemy of Dennis the Menace.

Beano Studios has written to the Conservative MP, warning that his distinctive style is a rip-off of Walter and calling on him to "cease and desist".

And he said the North East Somerset MP had copied Walter's "snootiness" and his efforts to stop others having fun.

Accusing the prominent Eurosceptic backbencher of "masquerading as Walter Brown", Mr Stirling wrote: "It is evident that there are numerous instances whereby you have adopted trademarked imagery and brand essences of the character to the benefit of enhancing your career and popularity.

"We firmly request that you cease and desist in your ongoing impersonation of the character, which remains the exclusive property of Beano Studios.

"A swift response on this matter would be greatly appreciated to avoid getting Teacher involved."

Mr Rees-Mogg responded on Twitter: "I am flattered to be accused by the Beano's legal eagles of imitating Walter the Softy whose powerful physical prowess is so much greater than my own."

Mr Stirling, who is head of Beano Studios Scotland, said the similarities between Walter and Mr Rees-Mogg had been spotted by young readers of the comic and its beano.com website.

He said it was clear that Walter had devised his trademark style first, as he first appeared in the Beano in 1953, 16 years before Mr Rees-Mogg's birth in 1969.

"We were flattered when we discovered that Jacob Rees-Mogg has dedicated his life to impersonating one of my favourite Beano characters, young Walter," Mr Stirling said.

"Nonetheless, as a hard-working British media company, we would prefer the public gets its Walter fix in the pages of our comics and on beano.com, rather than played out on the political stage. In other words, bog off Rees-Mogg!"