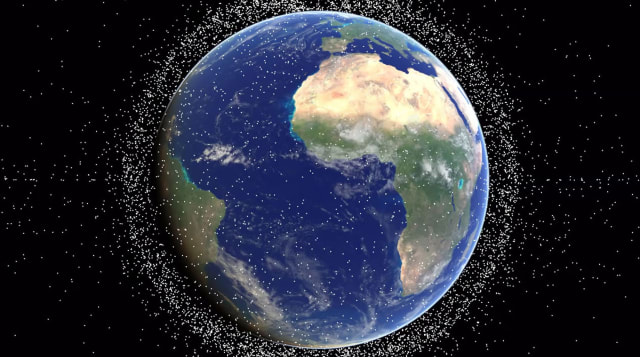 A British-led mission demonstrating how to salvage potentially dangerous junk orbiting the Earth is set for launch less than a day after a Chinese space station broke up over the Pacific.

The RemoveDEBRIS satellite, to be deployed from the International Space Station (ISS), will carry a net for capturing space litter and a harpoon that can be used to spear and haul in larger objects.

A Space X Falcon 9 rocket is waiting to deliver the box-like craft to the ISS from the Kennedy Space Centre at Cape Canaveral, Florida.

The fiery demise of the Chinese space lab Tiangong-1 was a timely reminder of the growing hazard of space junk.

The defunct 10.4 metre long space craft, weighing 8.5 tonnes, re-entered the atmosphere at around 01.15 BST on Monday.

According to official reports it mostly broke up harmlessly above the South Pacific, but there is uncertainty about its precise fate.

Astronomer Jonathan McDowell, from the Harvard-Smithsonian Centre for Astrophysics in the US, tweeted that it appeared to have come down north-west of Tahiti.

Nasa tracks more than 20,000 pieces of debris larger than a cricket ball orbiting the Earth at speeds of up to 17,500mph. There are an estimated 500,000 pieces the size of a marble or larger.

Although the chances are low, a collision between even a small object and a space craft carrying valuable equipment or a human crew would be disastrous.

In 1996, a French satellite was hit and damaged by debris from a French rocket that exploded a decade earlier.

On February 10 2009, a clapped-out Russian satellite collided with and destroyed the functioning Iridium communications satellite. That collision added more than 2,000 extra pieces of trackable debris to the growing space junk inventory.

RemoveDEBRIS, designed and built by a consortium led by the University of Surrey and funded by the European Commission, is the first practical attempt to try out clean-up technology aimed at tackling the problem.

Professor Guglielmo Aglietti, director of the Surrey Space Centre at the University of Surrey, said: "It is important to remember that a few significant collisions have already happened.

Therefore, to maintain the safety of current and future space assets, the issue of the control and reduction of the space debris has to be addressed.

"We believe the technologies we will be demonstrating with RemoveDEBRIS could provide feasible answers to the space junk problem - answers that could be used on future space missions in the very near future."

In the first of a series of capture experiments, a net will be discharged to wrap around and ensnare a target cubesat miniature satellite.

A second experiment will see a harpoon fired at a target plate. Other tests of navigation and a large drag sail designed to slow down the RemoveDEBRIS space craft as it falls out of orbit, ensuring it burns up on re-entry, will also be carried out.

Science minister Sam Gyimah said: "Space debris is a growing concern so it's great to see a British university and our innovative space sector leading the way in the search for solutions."