Thousands show solidarity with rape victims at rallies in Ireland 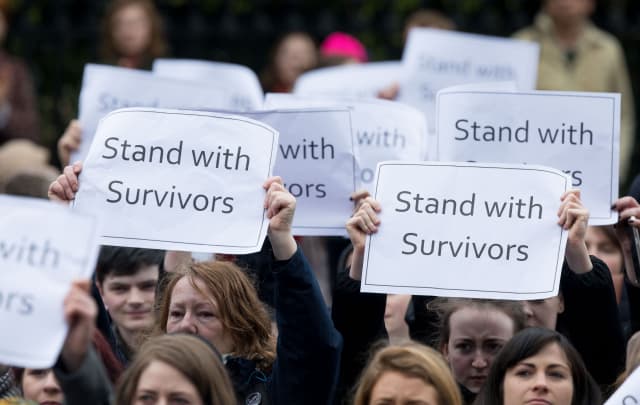 Thousands of people have attended rallies to demonstrate following the outcome of a rape trial.

Demonstrations were held in several cities across Ireland including Dublin, Belfast, Galway and Cork.

The jury of eight men and three women deliberated for three hours and 45 minutes after hearing all the evidence presented during the nine-week trial at Belfast Crown Court.

In Dublin more than 4,000 protesters gathered outside City Hall.

Some waved placards with the words "Stand with Survivors", "Overhaul the System" and referencing the "IBelieveHer" campaign as they marched to the Department of Justice on St Stephen's Green.

Men, women and children joined the huge procession -- the second major demonstration organised in the wake of the not guilty verdicts.

There were chants of "two, four, six, eight, consent is not up for debate" as well as "my black dress does not mean yes" and "whatever we wear, we go yes means yes and no means no".

On Thursday Jackson's legal team said defamation proceedings were being launched against Irish senator Aodhan O'Riordain over social media comments he made about the rugby international's acquittal.

However, news of the civil suit sparked a social media backlash with a campaign #SueMeTooPaddy gaining huge traction on Twitter.

In a statement, Jackson's lawyers KRW Law said: "We will not hesitate to repeat similar legal action against anyone, who deliberately or otherwise, sees fit to attack our client.

"We are examining carefully every item of social media commentary which seeks to challenge the integrity of the jury's full endorsement of our client's innocence. High court proceedings will issue shortly in both Belfast and Dublin."

Meanwhile, it also emerged that online comments posted by a juror in the rugby rape trial are being investigated by Northern Ireland's Attorney General.

Two other people have been questioned by police in Northern Ireland in relation to naming the complainant in the case online.

In other post-verdict developments a number of media outlets are challenging reporting restrictions still placed on the case.

Jackson was also found not guilty of sexual assault.

Two other men were acquitted of lesser charges related to the same incident in June 2016.

Blane McIlroy, 26, was acquitted of exposure while Rory Harrison, 25, was found not guilty of perverting the course of justice and withholding information.

The high-profile trial, which ran for 42 days, generated an unprecedented level of public attention and prompted calls from Jackson's defence solicitor for a crackdown on social media comment during criminal proceedings.

It has also renewed the debate on whether defendants in rape trials should also be entitled to anonymity, with their names only being revealed if they are convicted.