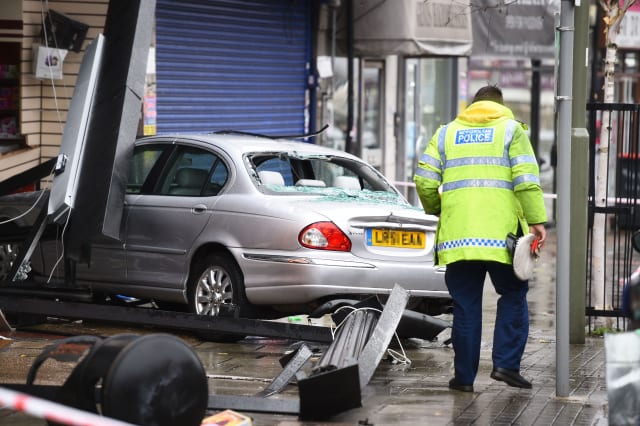 Two pedestrians rushed to hospital after a car smashed into a pharmacy have not suffered life-threatening injuries, police said.

Passers-by said a silver car mounted the pavement in a busy Jewish shopping district in Golders Green Road, north west London, which was packed with people doing their Passover or Pesach shopping.

The London Ambulance Service (LAS) was called to the incident at 11.46am on Wednesday. Two men - aged 80 and 45 - remain in a central London hospital.

Scotland Yard said the car had hit the pair as it careered into the shop.

The male driver of the car stopped at the scene and assisted officers, but was not arrested, police said.

Detectives have asked anyone with footage of the incident or who witnessed the collision to contact the the Serious Collision Investigation Unit at Alperton on 020 8991 9555.

The air ambulance, three ambulance crews, an incident response officer and a hazardous area response team were sent to the scene by the LAS.

Local resident Sharon Klaff, 69, who was driving to work as a yoga teacher in the aftermath of the crash, was told that a man had been trapped under a car.

She said: "It is a terrible thing to see. It is quite traumatic to watch. The police and the emergency services have been doing a fantastic job in caring for people. It is troubling to see. In my heart I am hoping it was just an accident.

"When I came to the shop there was people holding the shopfront up so that the debris - like the sign - did not fall and hit anyone. People were trying to help and trying to make sure that no one got injured."

CST, a charity that helps British Jews tackle antisemitism, tweeted that it appeared to be an accident.

A London Fire Brigade spokesman said fire crews from Hendon, Finchley and Paddington fire stations were called out to "a road traffic accident involving a car in collision with a shop front".