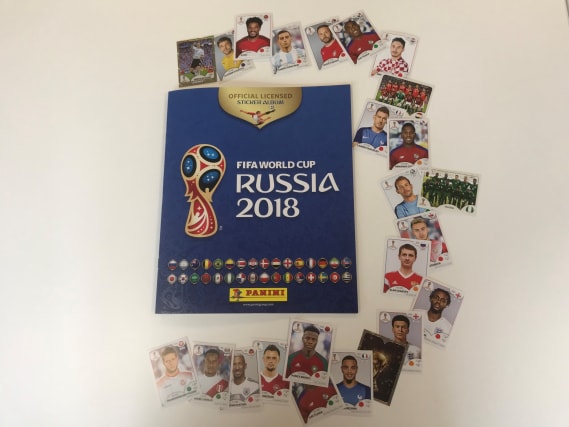 The average cost for a single collector to complete Panini's World Cup 2018 sticker book is £773.60, a leading mathematician has calculated.

Professor Paul Harper has considered the best case scenario and the most likely cost of filling this year's album after the Italian brand announced the cost of a pack of five stickers was increasing from 50p to 80p.

With 32 squads of players, as well as special stickers for managers, stadiums and World Cup legends, the task of completing the album is a considerable one.

The maths expert from Cardiff University's School of Mathematics said the minimum cost of collecting all 682 stickers was £109.60, based on buying 137 packets and never getting a duplicate but he said this was "extremely unlikely".

Prof Harper then turned his attention to the more likely scenario.

He said: "The first sticker you buy is absolutely guaranteed not to be a duplicate.

Prof Harper then added up all of the probabilities of getting a new sticker to obtain a formula, which he adjusted using conditional probabilities because the stickers come in packs of five.

Prof Harper added his calculations showed that once you had only 19 stickers left to collect, you would still need to buy 483 packets of stickers to complete the album.

He said: "What is interesting is that to collect just the last 19 stickers for the book, you would still be required to buy 483 packets of stickers, or half the total number of expected packets.

"Put another way, you are only half way through when you have just 19 stickers left to collect."

However, Prof Harper said avid collectors could significantly reduce their outlay by collecting in groups and said two people collecting and swapping can reduce the number of packets required by 30%, five players by 57% and 10 players by 68%.

However, even with 10 friends swapping it might still cost them each £247 on average to complete the album.

In 2016 Prof Harper calculated that the average cost of filling the brand's 680-space Euro sticker book was £374, meaning the cost has more than doubled from that in 2018.

He said: "I can still recall the joy of finally completing my first Panini album as a young boy for the 1982 World Cup in Spain.

"I must have used an awful lot of pocket money to do this, as well as having generous grandparents handing over bundles of packets of stickers, coupled with tense negotiations of swapping duplicates with friends in the school playground.

"Filling an album has become progressively more expensive over the years since then, not just because there are typically more teams competing now, but because Panini have become more creative about allocating spaces."