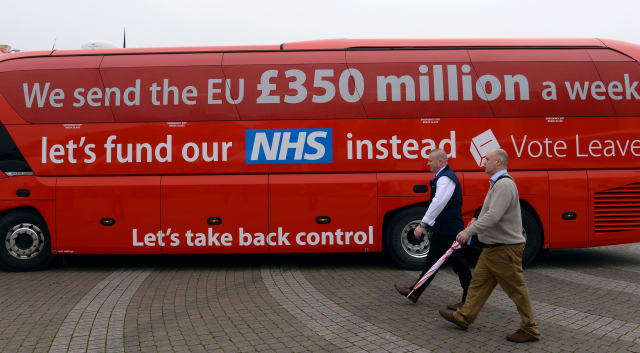 The whistleblower who claimed the official Brexit campaign broke strict spending rules during the European Union referendum will set out further evidence to back up his allegations.

At a press conference in London on Monday Shahmir Sanni and his lawyer will present evidence and a legal opinion relating to the Vote Leave campaign.

Foreign Secretary Boris Johnson - who played a leading role in Vote Leave - has dismissed as "ludicrous" the allegation the campaign broke election spending rules but opponents called for the police to investigate.

The claims centre around Vote Leave - the officially designated campaign in the 2016 referendum - and its links to the BeLeave group which it helped fund.

Mr Sanni claimed Vote Leave used BeLeave to get around the strict £7 million spending limits monitored by the Electoral Commission.

Mr Parkinson and Vote Leave have strongly denied wrongdoing and said the £625,000 donated to BeLeave was within the rules which allowed money to go to other, independent, campaigns.

But Mr Sanni told Channel 4 News: "I know that Vote Leave cheated ... I know that people have been lied to and that the referendum wasn't legitimate."

The £625,000 was reportedly given straight to Canadian company AggregateIQ - which is alleged to have links to controversial data firm Cambridge Analytica.

Mr Sanni said: "In effect they used BeLeave to over-spend, and not just by a small amount ... Almost two-thirds of a million pounds makes all the difference and it wasn't legal."

Cabinet ministers Mr Johnson and Michael Gove were heavily involved in the campaign.

The anti-Brexit Best For Britain group has written to Mrs May demanding answers from the Prime Minister about what her two Cabinet colleagues knew.

The group also questioned whether Number 10 was involved in the "outing" of Mr Sanni, asking whether official Government equipment or email accounts were used.

Mr Gove, who was campaign co-chair for Vote Leave, said the result of the referendum must be respected.

"I respect the motives and understand the feelings of those who voted to remain in the EU," he said.

"But 17.4 million opted to leave in a free and fair vote and the result must be respected. It's our job now to work to overcome division."

Deputy Labour leader Tom Watson told BBC1's Andrew Marr Show: "The people that led these campaigns are now senior Cabinet members, and I think we need to make sure that they were not aware of what was going on, and that's why I think the resources are needed, and if needs be the police should be resourced to investigate as well."

He said: "I cannot see how our relationship, which was ongoing at the time of the referendum and which is a material fact in the allegations being made, could have remained private once Shahmir decided to publicise his false claims in this way."

Mr Parkinson said he had no responsibility for digital campaigning or donations on the Vote Leave campaign and was "confident that I stayed within the law and strict spending rules at all times".

Commons Leader Andrea Leadsom told Sky News' Sunday with Niall Paterson it was an "incredibly difficult area" but "Stephen Parkinson has said the reason for his statement was because the context of the background of these allegations is very important".

Health and Social Care Secretary Jeremy Hunt defended Mr Parkinson as "someone of the highest integrity", adding "there are two sides to these stories".

Tory MP Heidi Allen told Peston on Sunday: "The whole thing feels pretty filthy and when you mix personal relationships and works it can get messy, as it has done here."

She said the row over Mr Parkinson and Mr Sanni's relationship "feels like a bit of a smokescreen" and "you need to separate the gossip and the discrediting from what actually happened".