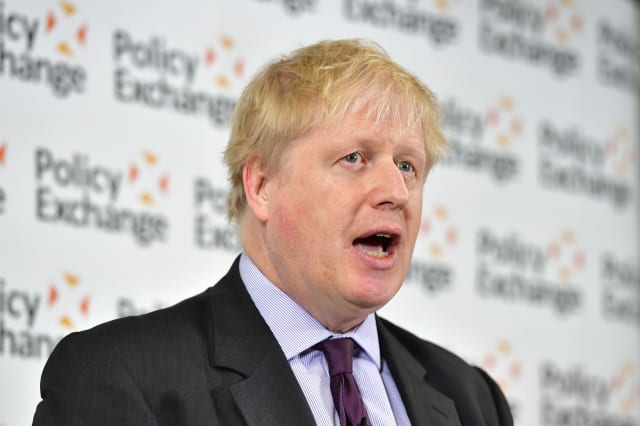 Iran should stop sending weapons into Yemen if it is genuinely committed to supporting a political solution to the conflict, two Cabinet ministers have said.

In a joint statement Foreign Secretary Boris Johnson and International Development Secretary Penny Mordaunt highlighted how a UN panel of experts recently concluded that Iran is in non-compliance with UN Security Council Resolutions.

The UN experts said in their report to the UN Security Council earlier this year that Iran had failed to "prevent the direct or indirect supply, sale, or transfer" of items including ballistic missiles.

"If Iran is genuinely committed to supporting a political solution in Yemen - as it has publicly stated - then it should stop sending in weapons which prolong the conflict, fuel regional tensions, and pose threats to international peace and security," they said in the statement.

"We question why Iran is spending significant revenue in a country with which it has no real historical ties or interests, rather than using its influence to end the conflict for the good of the Yemeni people."

In recent months there has been reports of a number of ballistic missiles fired towards Saudi Arabia from Yemen by the Houthi rebels.

Within the statement issued by the two Cabinet ministers, they said Saudi Arabia has "the right to defend itself against security threats including missiles launched from Yemen".

Mr Johnson and Ms Mordaunt also added: "We support the Saudi-led Coalition's efforts to restore legitimacy in Yemen, as accepted by the UN Security Council."

The UK has sold £4.6 billion worth of arms to Saudi Arabia since airstrikes in Yemen began, according to the Campaign Against Arms Trade.

Saudi Arabia has faced criticism over its role in Yemen's civil war, with warnings the kingdom was "orchestrating what will potentially become the worst famine in the last 50 years".

Mr Johnson and Ms Mordaunt highlighted how the humanitarian crisis triggered by the conflict has left more than 22 million people in need of assistance.

"In the last eight months alone, an additional one million people found themselves without the necessities such as food and medicines that they need to survive," the statement adds.

"With the rainy season fast approaching, the crisis could be made even worse if there is another surge in the cholera outbreak - the number of suspected cases reported over the last year is already well over one million."

They said the UK has been "at the forefront of the international response" and is the "third largest humanitarian donor to Yemen".

British help and intervention has included food, water and sanitation, plus the funding of a new cholera response programme that aims to vaccinate 1.1 million against the disease.

Calling on all parties to "return to the negotiating table to find an inclusive political solution", Mr Johnson and Ms Mordaunt also warned that "without de-escalation and a political settlement millions of civilians risk starvation".

"We call upon countries of the region and the international community to redouble their efforts in support of this goal, and for parties to the conflict to allow unhindered commercial and humanitarian access throughout Yemen, including for fuel, and for the government of Yemen to pay public sector salaries across the country," they added.

"We will continue to play our part in restoring the peace and security needed for Yemenis to resume normal lives."