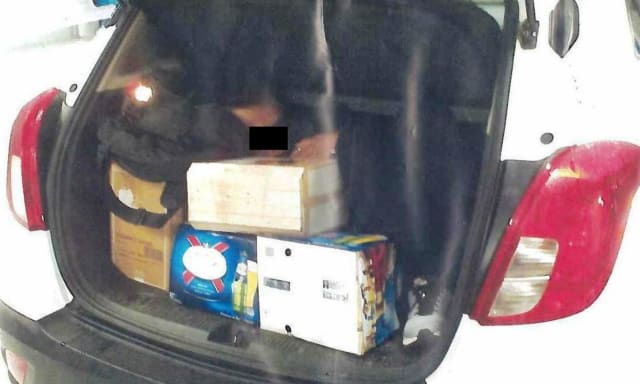 Two men who tried to smuggle an illegal migrant into the UK via France by concealing him behind boxes of wine and beer have been jailed, the Home Office has said.

Jason Lee Palmer, 41, and Richard Giles 39, were caught as they attempted to leave France by the Channel Tunnel shortly after midnight on May 20 last year.

The pair from Cardiff were stopped in their Vauxhall Mokka at the tunnel entrance in Coquelles and Palmer, who was driving, claimed he had been to France to buy wine, beer and cigarettes.

Officers searched the vehicle and found the Vietnamese migrant hidden behind boxes of alcohol in the boot.

A statement issued by the Home Office said the pair were found guilty of assisting unlawful immigration into the UK on February 8 by a jury after a trial lasting three days at Canterbury Crown Court.

Commenting after they were sentenced on Friday, assistant director of Immigration Enforcement Criminal and Financial Investigation (CFI) David Fairclough said: "I hope their convictions send a clear message to anyone tempted to get involved with this kind of criminality - you will be caught and brought before the courts.

After his arrest, Palmer, of New Road, Rumney, Cardiff, was interviewed by CFI officers and claimed he left Wales on the Friday morning to travel to Calais to buy alcohol for a family party - and he had locked the vehicle each time he left it so could not explain how the migrant entered the vehicle

Palmer was sentenced to three years in prison for the people smuggling charge and an additional five months consecutive for an offence of possessing a bladed article following an arrest in Cardiff.

Giles, of Pittsfield Place, Cardiff, did not answer questions when interviewed, but a forensic examination of his mobile phone showed text messages sent to and received from an unknown third party detailing the car's make, colour and registration number.

He was sentenced to two years and six months imprisonment.

Mr Fairclough added: "The telephone messages, considered in conjunction with the fact that the Vietnamese man could not have accessed the vehicle without help, left us with a strong case that Palmer and Giles were willing participants in this attempt to breach the UK's border controls."

The Home Office said the illegal migrant, who claimed he was from Vietnam, was passed to the French authorities.

Paul Morgan, director of Border Force South East and Europe, added: "Border Force works in close partnership with other UK and French law enforcement agencies to secure the border in northern France, the result of which is that it is one of the most secure in Europe.

"We will continue to work to ensure that people smugglers and traffickers, whose actions so often put the lives of others at risk, face the full consequences of their crimes."