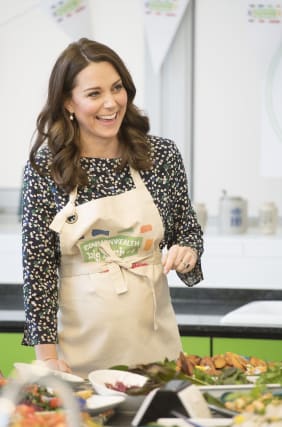 The Duchess of Cambridge said cooking with her children can get messy as she added the finishing touches to this year's Commonwealth Big Lunch.

Kate and William were meeting locals and volunteers at St Luke's Community Centre, north east London, before everyone sat down to dishes from Mauritius, Malaysia, India and Jamaica.

The royal pair even exchanged one of their favourite recipes for buttered chicken, which staff said they couldn't wait to cook.

The Big Lunch, which originated with the Eden Project charity in 2009, encourages people to sit down to a meal with members of their community once a year.

Peter Stewart, executive director of the Eden Project, said: "We wanted to be able to take that really simple concept of breaking bread together and just working it into a much larger scale.

"Having the royals here gave us a boost, a bit of momentum going forward. It was a really big moment for us."

It was the last royal engagement carried out by the heavily pregnant Duchess, who wore a cream coat by Goat and a patterned top by Hobbs, before she goes on maternity leave.

Her third child is due in April.

Chef Matt Jones, 45, from Seattle, who has been at the centre for several years, said: "It was fantastic - the opportunity to meet people of their influence.

"As we got them to decorate our dishes Kate said she cooked with her kids but that it sometimes got a bit messy. That's why I prefer teaching adults.

"I'm very intrigued about their recipe."

Community centre member Sakaina Buhari, from Sierra Leone, said: "I'm very happy to see them come down to share things with us. We love it."

Angela Dooley, 43, from Essex, who works in the kitchen, added: "It's just really nice that they've come. It was amazing, everyone was looking forward to it.

"We're all excited to cook the recipe they brought."

In the centre's cafe William and Kate were given a briefing on the work of St Luke's which provides services and activities.

It has a range of facilities including a fully equipped cookery school and runs community classes on healthy home cooking and avoiding food waste.

Commonwealth Big Lunches are part of the official celebrations leading up to the Commonwealth Heads of Government Meeting (CHOGM) being staged in London and Windsor Castle next month.

To request a free planning pack for a Big Lunch between March 12 and April 22 visit
www.commonwealthbiglunches.com or call 0845 8508181.