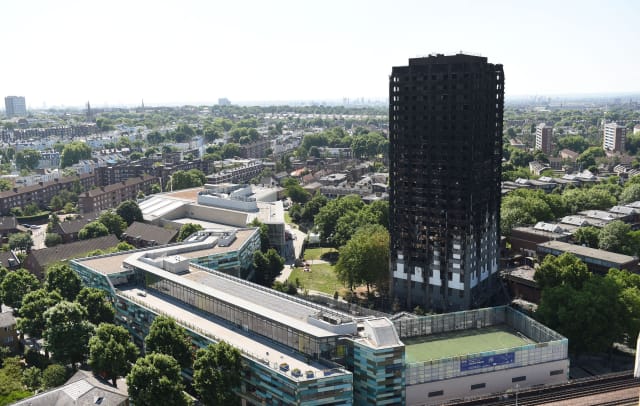 An independent task force set up in the wake of the Grenfell Tower fire has accused Kensington and Chelsea Council of failing to take effective action to help survivors of the disaster.

A new report by the recovery task force said the council's record on converting plans into action on the ground was "patchy", with a lack of trust in the local authority identified as a major obstacle to the recovery process.

It came as Communities Secretary Sajid Javid told MPs that nine months on from the fire, just 62 out of 204 households had been resettled into permanent accommodation.

The task force report said: "The task force has not seen enough evidence yet that RBKC's commitment, strategies, plans and resources are translating into improved outputs or outcomes for enough bereaved, survivors and the wider community.

"Converting plans into action and delivery on the ground remains patchy. For example, RBKC has brought together statutory partners in new ways, and plans have and are being refined as a result. Nevertheless this is not yet translating into measurable improvements to services.

"The gulf in trust between the community and the council also remains a major impediment to progress ... that mistrust remains, and it will take many years to change that.

"Until tangible outcomes begin to be felt by the bereaved, survivors and the wider community, this will continue to be the case."

While the rehousing approach had shown huge effort and some innovation, the task force found there was "still insufficient evidence of positive outcomes at this stage".

It added: "Whilst the amount of effort and resource in this area is substantial, the number of households in emergency accommodation is still too high and the numbers permanently rehoused, too low."

The council has made a number of recent changes to its approach and the next six to eight weeks will determine if this has been sufficient to deliver the step change required, the report found.

In a statement to the Commons, Mr Javid told MPs that 82 households were still in emergency accommodation, including 15 in hotels with 25 families and 39 children among them.

"It was always going to be a challenge to respond to an unprecedented tragedy on this scale and to secure new accommodation in one of the country's most expensive locations, but progress has not been made as quickly as it should have done," said Mr Javid.

"It is unlikely that all households will be permanently rehoused by the one-year anniversary of the fire. This is clearly not good enough, and I hoped to have seen much more progress.

"It's very understandable that the people in north Kensington will feel disappointed and let down."

In her response to the report, Ms Campbell accepted there was more to do.

"Firstly, what is clear from this report is that our pace, especially in rehousing families, is not quick enough. So we will be addressing that issue first and foremost," she said.

"We still have an issue with trust, but I have said before, trust takes time and trust takes action.

"The task force wants us to be more consistent, but they also want us to be flexible and work with families individually and with empathy.

"This is a difficult balance, and one that officers are getting to grips with as we seek to drive through some of the changes we want in the council's overall culture and the way we interact with our communities.

"The road to recovery is a long one - survivors want justice, they want answers and they want peace.

"But I want us to play our part. Listen to them, be guided by them and deliver the help, the support, and the home, that gives this journey the best possible start."

RBKC paid £20.9 million in hotel bills between the fire last June and mid-February, according to information obtained by the Press Association.

But Ms Campbell said she would make no apology for putting a roof over people's heads, saying the majority of money spent on emergency accommodation was spent when hundreds of people had been displaced by the blaze.

A quote from Grenfell United, the main body representing survivors and bereaved families, is also included in the report, saying: "We have not seen evidence of a change. We can see there is activity, but it's still not evident what is actually changing on the ground.

"We can understand that plans can take some time to have an effect, but it is now eight months since the fire and nothing has changed."

The group also warned that a "humanitarian aspect" was lacking from the rehousing effort, with many people still not properly matched to suitable accommodation.

Kensington MP Emma Dent Coad, meanwhile, said some homes earmarked to rehouse families were now being sold at a loss because families did not want them.

The Labour MP added: "I believe that the truth is being censored and people are demanding why. Trust is being eroded with the council."

The recovery task force makes several new recommendations at the end of its report, including urgent work to rebuild trust with the community and ensuring that the rehousing plans are "paramount to the recovery effort".