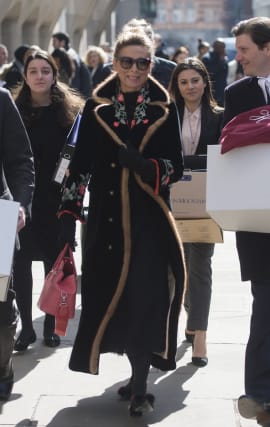 Supreme Court justices have been asked to consider issues in a case in which a Russian billionaire was ordered to pay his estranged wife £453 million by a London divorce court judge.

Tatiana Akhmedova was given a 41.5% share of Farkhad Akhmedov's £1 billion-plus fortune by Mr Justice Haddon-Cave following a hearing in the Family Division of the High Court.

News of Ms Akhmedova's payout emerged during the summer of 2017 when Mr Justice Haddon-Cave revealed detail in a written ruling.

The award is thought to be the biggest made by a divorce court judge in England.

Court of Appeal judges have analysed legal issues involving a solicitor who worked for Mr Akhmedov.

Anthony Kerman, who had represented Mr Akhmedov at an early stage of proceedings, complained that he had been unfairly summonsed at short notice to give evidence to Mr Justice Haddon-Cave.

Ms Akhmedova said Mr Kerman's complaint should be dismissed and in February three appeal judges ruled in her favour following a hearing in London.

He will first have to persuade justices that he has a case worth arguing.

The spokeswoman said justices had yet to make any decisions.

Mr Justice Haddon-Cave on Wednesday reviewed the case at a follow-up High Court hearing in London.

Lawyers representing Ms Akhmedova have said she has yet to receive "a penny" of the money Mr Akhmedov was ordered to pay.

They told Mr Justice Haddon-Cave that he had assets including a plane, a helicopter and a yacht.

But they accused Mr Akhmedov of hiding assets in a bid to avoid paying Ms Akhmedova.

Ms Akhmedova was at the hearing. Mr Akhmedov was not in court.

Mr Akhmedov said, after the appeal court ruling in February, that he could not get justice in Britain.

He said he married Tatiana Akhmedova in Russia and the marriage was dissolved in Russia and he said British courts should not "interfere".