Protesters in Glasgow march against racism 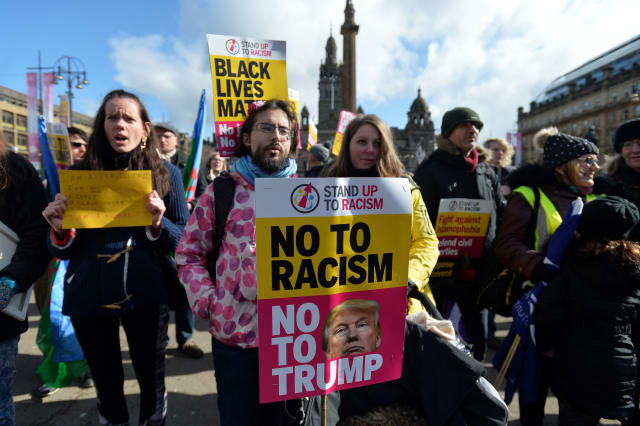 Protesters have taken part in a march against racism in Glasgow in solidarity with events in other European cities.

Organisers said that around 1,500 campaigners from a coalition of civic organisations, trade unions, political groups and others took to the streets for the Stand up to Racism (Scotland) demonstration on UN anti-racism day.

They were protesting against the "rising tide of racism, Islamophobia, anti-Semitism and the scapegoating of refugees and migrants".

Police said there were no reports of any issues but monitored the situation as pro-Palestinian and pro-Israeli demonstrators faced off during the march.

The demonstrators marched from Holland Square to George Square in Glasgow, where a rally was held.

Mr Sarwar has previously spoken out about the racism he experienced during his Scottish Labour leadership bid last year and has launched a cross-party group on tackling racism and Islamophobia at the Scottish Parliament.

"We can only challenge them if we stand together united as one."

He added: "Only if we stand together, united as one community, one society and one nation can we build a country free of prejudice, free of hate."

Davie McLachlan, former leader of the Labour group on South Lanarkshire Council, was suspended by Scottish Labour in January pending an investigation after allegedly making a racist remark about Mr Sarwar, which he denies.

Last month Labour MP Hugh Gaffney apologised for using "deeply offensive" language during a Burns Supper speech, while on Friday the party was hit by another racism incident.

Dumfries and Galloway councillor Jim Dempster has been suspended from the party pending an investigation after making an Islamophobic comment about Transport Secretary Humza Yousaf MSP.

Mr Dempster reportedly said that if Mr Yousaf had visited the region, "he may have been at Springholm but no-one would have seen him under his burka".

Speaking at the rally on Saturday Mr Leonard said: "In the fight to rid our society of racism, we cannot be moderate, we cannot be patient, we need to be impatient and angry in our pursuit of justice and equality.

"And that applies inside the Labour Party just as much as in wider society."

Talat Ahmed, Stand Up To Racism Scotland convenor said: "All those that back our aims should join us. Let's make the racists afraid again.

"Let's welcome refugees and migrants and make sure that fascists we are seeing grow across Europe right now do not grow here."