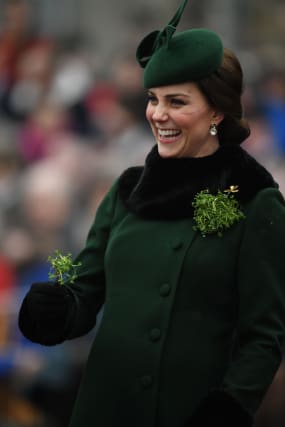 The heavily pregnant Duchess of Cambridge resisted the temptation of a St Patrick's Day tipple during a traditional toast to her and her husband by the Irish Guards.

Kate sipped a sparkling water while the Duke of Cambridge clutched a pint of Guinness at the end of a visit to the 1st Battalion at their base in Hounslow, west London.

The royals faced down snowfall and ferocious winds to watch the annual parade of the guards, of which William is Colonel.

But the future king saved his plaudits for the troops, telling one they had felt "sorry" for them in the biting cold.

The longest-serving guardsman of the battalion, Stephen Williams declared a toast to the Duke and Duchess for a second year in a row at the mess hall and thanked the Duchess for the shamrocks.

The 30-year-old told the Press Association: "I thought it went well, I was very proud to do it on behalf on the battalion.

"They said they recognised me from last year which is a good thing.

"I've been here for 10 years so the most senior person does it every year.

"It's the first time we've had snow on the parade, usually it's a warm day - what was it, -3C outside?

"They said they felt the cold and felt sorry for us."

Drinks ordered were placed in advance, with Kate, who is expecting their third child next month, requesting a sparkling water with ice and lemon, he added.

The royals then milled around and chatted to the troops, some of whom gleefully took selfies with the couple in the background.

Earlier in the day, 350 soldiers arrived on the Parade Square in their red regalia, led Irish wolfhound Domhnall.

Kate, wearing a green Catherine Walker coat and a Gina Foster hat, stepped forward to present the shamrock to officers and warrant officers.

Betraying no awareness of the biting temperature, she smiled and chatted to each of the military men in turn, finally fastening a shamrock to the collar of Domhnall.

William took the salute as the regiment continued a march-past and three thunderous cheers were then declared to the royals.

Prior to the parade, Domhnall's handler, Drummer Aidan Cathcart, jokingly expressed reservations that his charge would behave.

He said: "Domhnall's role is very monumental - he is the first guy on the parade. He is the main guy on the march, it's a pretty important day for him."

Asked if he was confident Domhnall would perform as planned, he replied, bluntly: "No."

The wolfhound - the regiment's longest serving mascot since 1985 - had been doing test runs all week to prepare for his moment in front of the royals.

It is the fifth time he has received the shamrock and the second time he has been handled by Drummer Cathcart.

The Irish Guards were well prepared for the surprise turn in the weather, having recently conducted the Changing of the Guard in heavy snow during Storm Emma.

Also among the guests on Saturday was the Irish Defence Force's most senior military officer, chief of staff Mark Mellett.