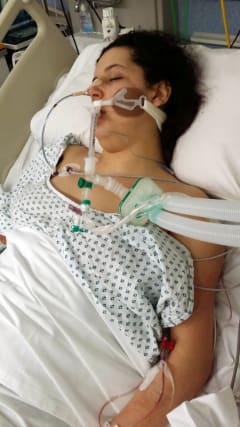 Horrifying footage has been released by the family of a female engineering student who died almost a month after an alleged attack in Nottingham.

Mariam Moustafa was left in a coma after a street assault on February 20 and died from her injuries on Wednesday.

The teenager got on a bus at the scene near the Victoria Centre shopping precinct but was followed by a group, who it is claimed were then threatening and abusive towards her.

The disturbing footage shows Mariam at the back of a bus and at one point the 18-year-old appears to be hit by one of the others in the video.

The teenager was allegedly punched several times during a confrontation with a group of women in Parliament Street, Nottingham, before she was later taken to the Queen's Medical Centre in the city.

The footage appears to show Mariam surrounded at the back of the bus as the gang shout at her.

Mariam's father, Mohamed Moustafa, has since called for "justice" for his daughter, who was "very  kind" and "like an angel".

Nottinghamshire Police have said there was no information to suggest Ms Moustafa's death was a hate crime, although investigators were "keeping an open mind".